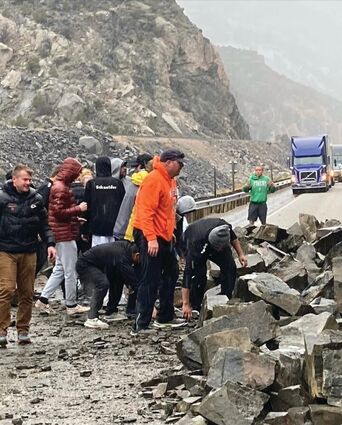 POWELL - Rain and loose rocks led to a dangerous situation in the Wind River Canyon on Saturday night, as a rock slide blocked traffic in both directions.

The Powell High School boys' soccer team was heading home from a long road trip to Pinedale and arrived just after the slide occurred.

"We were one of the first vehicles there, and we had some parents on the other side of it that saw it happen in their rearview mirrors," Panther boys' Head Coach David Gilliatt said.

At the scene, the Panthers were hesitant to check out the slide, as they were unsure if there were more rocks sliding down. But knowing that the Wyoming Department of Transportation was unlikely to arrive for an extended period of time, the Panthers sprung into action.

"I think we all just agreed after looking at it that we could get the rocks out of the road on the far left side and at least give it a try to see if other vehicles and our bus could get through," Gilliatt said.

Facing the incident head on, Gilliatt and the team had a plan of action, as they had people watching the cliffside in case more rocks fell down. They also planned where they would run should more rocks fall down the canyon.

The team worked quickly and moved enough rocks within seven minutes so that a semi – as well as other vehicles – could fit through the gap.

Gilliatt said that the team relayed the message beyond the canyon to parents and PHS Athletic Director Scott McKenzie that it was going to be late because of the incident.

The only injury reported in the incident was one player's minor cut, which was treated with a Band-Aid. The bus did lose a latch for one of the storage compartments underneath, but it was able to squeeze through in a tight gap.

"I don't think we thought about it being some big thing," Gilliatt said. "We just kind of decided 'Let's see if we can tackle this ourselves.' Many hands made quick work of it."

Just behind the Panther boys team was Michele O'BrienHampton, the mother of PHS girls team players Jaedyn and Sarah Hampton. The girls team made it through the canyon 45 minutes prior, and O'Brien-Hampton was just minutes behind the boys' bus after she finished watching their game in Pinedale.

When she arrived, she was also just behind the Worland boys soccer team bus.

She was told that there was a rock slide up ahead. She, along with the Warriors' coaches, went up to see what had happened. The Worland boys hopped out to help clear the road, but the Panthers already cleared the path enough for vehicles to pass through.

"You can see they truly are a team in every sense of the word," O'Brien-Hampton said. "That comes from great coaching too."

As she was passing through, law enforcement had arrived to take control of guiding traffic. When she drove through the cleared opening, it struck her as a point of pride that it was "our soccer team" who sprung into action to help clear the road.