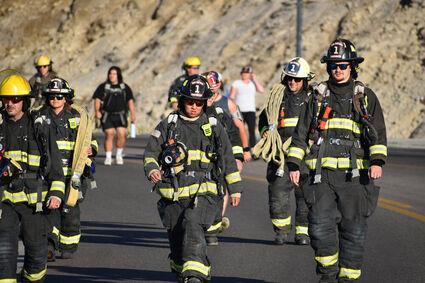 In 2021, about 200 participants joined local, county and state emergency responders in the annual Walk the Rock 9/11 Memorial Climb on Grant Street in Rock Springs

ROCK SPRINGS - Every year, thousands of participants across America walk, climb and run to remember those who sacrificed their lives to save others on Sept. 11, 2001.

In Rock Springs, firefighters are hosting the 2022 Walk the Rock, 9/11 Memorial Climb.

According to Kelly Mathis, captain of the Rock Springs Fire Department, the twin towers at the World Trade Center each had 110 floors and 2071 steps.

"We want to keep doing this for community involvement," said Mathis. "Members of the community will join firefighters to climb Grant Street in honor of the 343 firefighters from the Fire Department of New York City who gave their lives while trying to save others on that dark day."

Mathis explained that Walk the Rock will consist of four lengths of Grant Street, starting and ending at the top of the street.

"This will show the participants in the walk what it was like to be in full gear as those brave people climbed 110 stories," he said.

The first responders will have weight vests, hose bundles and tools for people to carry if they would like to experience the weight that firefighters had to carry while ascending the burning twin towers.

"It's steep, challenging and it can accommodate a lot of people," Mathis described. Mathis also mentioned that some participants and first responders may even go above and beyond by doing the equivalent of 343 flights of stairs in memory of the 343 emergency responders who lost their lives on 9/11.

Those who complete the 343 Challenge will receive a commemorative challenge chip. On the chip, the words "Never Forget" are inscribed.

Rock Springs Fire Department Chief Jim Wamsley said, "For us, in fire service, those aren't just words. We will always remember those sacrifices and we don't want to forget."

"We want to remember their heroism – their attempt to save a few lives – maybe some of those lives were already lost but they climbed in and did what needed to be done anyway," he added.

"I think that's an example for our conduct for all walks of life; certainly, for those in fire service. It's our job," said Wamsley. "We get in there and do whatever we can to save lives. That's what the fire service is all about. A lot of times we are fortunate to be able to prevent loss of life but bad things happen and we have a job to do."

Mathis was working at Copier and Supply, a small business in downtown Rock Springs, with his brother, before becoming a firefighter.

"My brother heard about it before coming into the shop and told us what was happening in New York City," Mathis explained. "My best friend was in the academy at West Point at the time. Back then, we had no way to track what was going on. We didn't even have a TV in the shop."

Mathis tried contacting him for about eight hours before he finally heard his voice.

"He wasn't close to downtown, in fact, he was 43 miles away from where they got hit," he shared. "I told him that the first thought I had when I heard the news was that the enemy would hit the military academy and wipe out all the future leaders of the United States."

Wamsley noted that "the towers were a symbol of western culture."

"They represented exuberance and power," he said.

Wamsley was still working for Church and Dwight in 2001. He had just gotten home from a graveyard shift when the attack began.

"I listened to the radio on the way home and the news of the towers wasn't mentioned," Wamsley revealed. "I had to call the plant for something and whoever answered the phone was in a panic. He said, 'Can't talk now. A plane just hit one of the towers in New York City!'"

Wamsley turned his television on as a commercial aircraft flew into the second tower.

"I normally would have slept all day but I didn't get a wink of sleep that day," he said. "They were somber days. It's one of those things where you hear people talk about those momentous events in their lives.

"It was truly the darkest day in the United States."

"For my parents, it was the assassination of John F. Kennedy," Wamsley said. "For me, it will always be 9/11. Before that, it was the first man landing on the moon when I was in the first grade."

"There are a few things I can recall but with 9/11, I'll always remember the feeling and just the way that day was so surreal," he said. "It has fundamentally changed our philosophies in the United States. It created a whole new federal bureau – Homeland Security of the United States."

"Anyone at any fitness level is invited to join us," said Wamsley. "This is definitely not a fitness competition. This is a memorial event and a personal challenge."