Stopping the stigma: After losing a loved one to suicide, Powell resident aims to help those suffering from mental illness 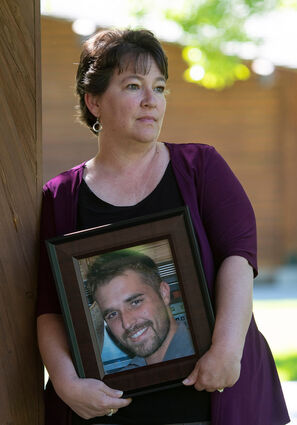 Heather Lang of Powell hopes to share her experience with losing her brother TG Howard to suicide in an effort to help others who are contemplating harming themselves or family and friends worried for their loved ones.

POWELL- The family of Thomas "TG" Howard wanted to make sure they didn't hide his mental illness and depression, listing it as his cause of death in his obituaries. It was important to find a positive in the unthinkably hard reality of how he died.

Howard took his own life Christmas day, 2015. The popular athlete at Cody High School who joined the Navy after graduation had first turned to alcohol and then opiates in an effort to deal with his mental illness.

"A lot of people that struggle with mental illness also struggle with addiction," said Howard's sister Heather Lang, of Powell. Howard was hooked on heroin. "If you have an addiction to hard drugs like he was, you're gonna go to jail eventually," she continued.

Howard had seen his fair share of trouble with law enforcement.

They had talked on the phone Christmas Eve. He said something to Lang that she misunderstood.

"They're coming to get me," he told her.

She would later find out her beloved brother attempted to end his life that night. The following day he hung himself.

"I just remember falling on the floor when [officials] called. I was just like, oh my gosh, I've got to tell my mom," she said. "That was rough."

The nine-hour drive to Colorado, where he was at the time of his death, was tense.

The memories are still fresh, yet for Lang it was important her brother didn't just become another statistic. Something good had to come from the loss of her funny, outdoors-loving brother.

She started to share the story of his demise in hopes of helping others suffering from mental illness. She was determined to "stop the stigma" of mental health issues.

"We're working to get rid of that stigma, but it's gonna take some time," she said.

On top of all these challenges, mental health care providers also must overcome the stigma attached to mental illnesses, which discourages many people from getting help.

All these problems have contributed to Wyoming having one of the highest suicide rates in the nation.

Lang started an area support group called Stop the Stigma, but when the COVID-19 pandemic hit in 2020, she found it too hard to continue.

Two years later she has decided to resume her efforts.

Starting Thursday and every Thursday in September, the Powell resident is opening an informational booth at American Legion Post 26.

She is collaborating with Dean Whalen, who is the owner/operator of Deano's Old-Fashioned Hamburgers food truck. For every hamburger he sells on Thursdays in September, Lang will donate a dollar to a scholarship in her brother's name.

The real estate agent with eXp Realty will also donate funds from the month's closings to the cause.

Wyoming's suicide rate of about 30 per 100,000 residents a year is twice that of the national average. Somebody kills him or herself every two days in the state.

Efforts by concerned folks like Lang to help have resulted in prominent informational campaigns and the creation of the nationwide 988 crisis hotline. Wyoming joined in the national implementation of the crisis hotline number in July, which replaces the former 10-digit number with a three-digit code, just as with the general emergency 911 number.

It was a great step toward addressing one gap in mental health care, the Tribune wrote in a recent editorial.

The Wyoming Legislature appropriated $2.1 million from the American Rescue Plan Act funding to support call centers. But it's still too early to know how effective the new service will be in addressing the problem.

Will Wyoming residents, who are raised in an environment that promotes independence and self-sufficiency, actually use the service, Lang wonders.

She hopes it helps slow the epidemic in the Cowboy State, but she refuses to rest knowing how her brother's death affected her own family and not wanting other families to go through the hardships her family has.

If you have any questions about suicide in Wyoming, contact the Wyoming Injury and Violence Prevention Program at http://health.wyo. gov/publichealth/prevention/ wivpp/