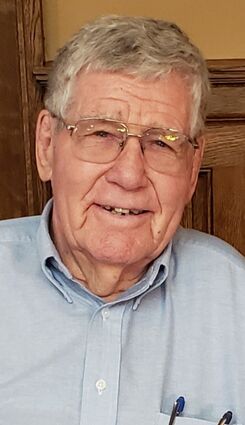 Gerald "Jerry" Geis left his walking sticks and leg braces behind as he walked into the arms of Jesus on November 2, 2022, in Loveland, Colorado. He was lovingly surrounded by his family.

Jerry was born to Nicholas Eugene and Hazel Irene (Harvard) Geis in a three-room log cabin near Ten Sleep, Wyoming, on August 31, 1933. Those early years were pretty adventurous for the Geis kids. With Homer and Neil already working, Harold often had to babysit Jerry, Jane and Lyle. Once Harold started working, the younger three were often referred to as the 3 Musketeers. Hunk (Jerry), Sis (Jane), and Bug (Lyle) got into their share of mischief over the years, but that only solidified a life-long bond that became even stronger over the years. His family moved to Worland, Wyoming, in 1944, where he attended Worland schools. Jerry was involved in the FFA, serving on the livestock judging team, as chapter treasurer, and playing on the FFA basketball team. His involvement with FFA was the highlight of his high school career; he loved reminiscing about Pappy Lowe and all of his friends. He graduated from Washakie County High School in 1951.

Jerry married Irma Lee (Lungren) Geis on November 3, 1956. They had two daughters, Elizabeth and Cheryl, four grandchildren, four great-grandchildren, and two granddogs. In the summer of 2021, Jerry moved to Loveland, Colorado to be close to his daughters.

At age 14, Jerry began working in the family livestock trucking business. Working with the livestock community and driving throughout the state of Wyoming inspired his love and respect for Wyoming and her citizens. Jerry eventually owned the business and operated it until 1991. He was a member of the Wyoming Truckers Association for over 20 years. After the sale of his trucking business, Jerry worked for McGarvin-Moberly Construction Company until retirement.

Jerry loved his family. His daughters, grandchildren, nieces and nephews all have memories of spending time with him on Upper Nowood, riding horseback, hunting grasshoppers, fishing in Deep Creek, and helping during cattle branding. When each of his grandkids turned eleven years old, he taught them to drive on those red-dirt mountain roads. For family birthday celebrations, Jerry provided his specialty: homemade ice cream. While the finished product was praiseworthy, the real treasure came with assisting him in the process of making the ice cream. Everyone vied for the opportunity to taste the ice cream fresh off the dasher. He enjoyed having his family as passengers in his truck when he hauled livestock. Irma would pack lunches and fill thermoses with coffee and hot chocolate and they'd all head out to load, then unload sheep or cattle. Liz and Cheryl usually brought their Barbie dolls to play with in the sleeper bed of his truck. His grandchildren enjoyed riding on the middle hump in the truck cab while Grandpa navigated the roads of Wyoming. During his time as a State Senator, he loved having his family visit, showing them around the Capitol Building, introducing them to his legislative colleagues, and inviting them to watch the proceedings from the floor of the Senate chamber. He taught Cheryl and Liz to play pinochle when they were young and carried on that tradition, teaching grandkids, sons-in-law, extended family and friends to play the game. That, along with playing dominos, were favorite pastimes with grandkids. After Irma died, he took over making her popcorn crunch, baking cookies, and creating crock pot dinners to share with family. He enjoyed following the Wyoming Cowboys, Colorado Rockies, Denver Broncos, UNC Chapel Hill basketball, and televised college women's softball. Jerry and Dorothy Scheurman, his sister-in-law and close friend, had a standing date to watch Jeopardy and Wheel of Fortune together. Every morning, he read aloud the Daily Bread devotional. Growing up, Jerry and his sister, Jane, did everything together; she even played a part in the beginning of Jerry and Irma's romance. Jerry, Jane, and their younger brother, Lyle, who Jerry described as his "little brother with a big heart," were close comrades, taking care of each other as youngsters and again, later in life.

Jerry loved the State of Wyoming. He enjoyed working with the wide variety of people he met through his vocational, political, and personal connections. His public service career touched six decades which began when he won as a write-in candidate for the Worland City Council. He served on the Council from 1967-1975. Local civic leaders recruited him to run for the state senate and he was elected in November 1974. During his career as a state senator, Jerry chaired the Revenue Committee and the Ways and Means (Appropriations) Committee, he served as vice president of the Senate, Majority Floor Leader and in 1984 - 1986, he served as president of the Wyoming State Senate. During his second tenure in the Senate, he served on the Education Committee and was the longtime Chair of the Agriculture, State and Public Land, and Water Resource Committee. Throughout his service as a state senator, Jerry was a contributing member of the National Conference of State Legislators, representing Wyoming at conferences in Alaska, Texas, Tennessee, Washington, California, Massachusetts, New York, Arizona, Colorado, and the District of Columbia.

One of Jerry's greatest legislative accomplishments was helping establish the Wyoming Water Commission which then developed vital water systems throughout the state of Wyoming. Of politics, he often stated, "When the elections are over, it doesn't matter whether you are Republican or Democrat. We all need to work together;" and "If you can't say it in five minutes or less, you probably shouldn't say it."

In 2005 Senator Geis was inducted into the Wyoming Agriculture Hall of Fame for his demonstrated commitment as a "true friend to Wyoming agriculture." He enjoyed advising the American Legion Girl State from 2003-2011. In 2016, Governor Mead asked Jerry to serve on the Wyoming Water Development Commission, calling him the "Water Guru," due to Jerry's extensive knowledge of Wyoming's waterways. In 2021, Jerry was inducted into Washakie County School District #1 Hall of Fame. He recently served on the advisory board of the Worland Senior Center where he loved playing pinochle, connecting with friends, and promoting membership and attendance. He faithfully attended Zion Church in Worland.

Jerry never met a stranger, he had a ready smile, an infectious laugh, and chose to recognize the best in those around him. Jerry will be dearly missed by his family, community, and friends throughout the state.