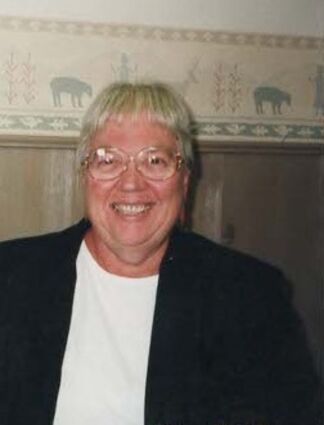 During WWII, Pat received her fourth and fifth grade education at Heart Mountain. Her classmates kept in touch throughout their lifetime.

It was a common occurrence for classmates to ask about Pat while visiting the museum. An extended family member would get a call and would connect them with Pat. This happened throughout her entire life.

The family moved to Worland in 1946 where her father opened Deluxe Cleaners.

Shortly after moving here, Pat sought out a church group and began going to Sunday school. A youth group took her in, and she was baptized into the United Methodist Church at the age of 13. She became Salutatorian of her graduating class in 1952. Pat spent her college years at Montana State where she earned a bachelor's degree in science and became an RN. She was working at a doctor's office in Worland when a rancher came in with a broken ankle. They were married 3 months later in October of 1957 which started Pat's career as a rancher. When the 4 boys got old enough, Pat became the school nurse in Ten Sleep. She loved the job and made a big difference in the community helping people with her knowledge of medicine. They moved into town in 1983. She spent the rest of her years living in Ten Sleep which she called the best community on earth. Pat retired from public health and school nursing in 1999.

Pat is preceded in death by her parents, Victor and Ethel and her loving husband, Harold Cogdill.

She is survived by her 4 sons, 14 grandchildren and 13 great grandchildren. She leaves behind many friends in the community and throughout the country who were very important to her. You all know who you are as she spent many hours on the phone with you.