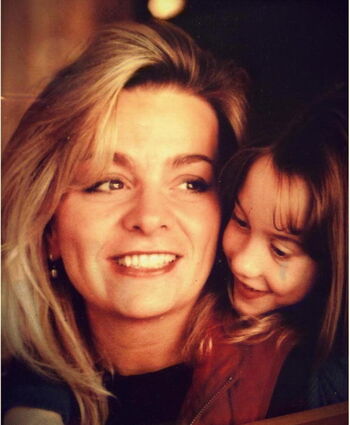 Sunnie Dawn Bates, also known with the last names Seghetti, Maser and Sanderson, passed away in her sleep in the early morning hours of November 6th, 2022. She lost her long battle to breast cancer that had spread around her body and to her brain.

Sunnie Dawn was born in Salt Lake City, Utah, on December 16th, 1969, to mother Ann Kristine Bates and father Jan Delee Bates. She was the youngest of four siblings. She lived in Utah until the family moved to Eagle River, Alaska when she was 7, and then to Casper, Wyoming when she was 10. She had most of her schooling in Casper and attended Kelly Walsh High School until her senior year where she attended Jackson Hole High School and graduated from there. In school, Sunnie thrived as an enthusiastic cheerleader and was voted Cheer Captain. She was an active member of the Church of Jesus Christ of Latter-Day Saints, and took some classes after high school, at Ricks College in Rexburg, ID.

At 20 years old, Sunnie married her first husband, Scott, whom she had met through her best friend, Toni. Sunnie and Scott resided in Jackson, and briefly in Idaho Falls, ID. The two finally welcomed one daughter, Taylor, when Sunnie was 27. She later married her second husband, Rick, after the birth of her son, River. Rick and Sunnie lived near Snow King in Jackson, and later bought a home in Alpine, Wyoming. After years of being single, Sunnie reconnected with a high school friend from Kelly Walsh, Timothy Sanderson ll, and the two were married on Halloween 2019. Sunnie and Tim spent their marriage living mostly in Rexburg, ID, but also spent some time living in Salmon, Idaho.

Most of her adult life, Sunnie ran the Teton Steakhouse in Jackson Hole, with her parents and her amazing staff, that turned into family. She also worked at the Americinn and Salt Lake Express in Rexburg, ID.

Sunnie enjoyed anything that included fun. She loved to create experiences for the people around her and of course, FUN and unique experiences. She was a proud Wyoming girl, and Jackson native. She was her happiest when surrounded by mountains.

To many people, Sunnie was considered family. She is known for her welcoming smile and contagious positivity. Sunnie made friends wherever she went and rarely did any friendships ever end. Even her ex-husbands and previous in-laws had strong friendships with her until her death. One of her best friends said "She was not a ray of sunshine in everyone's life, she was the sun- bringing life and giving warmth to everyone she came into contact with. The world is a darker place without her. The sun has set, but we will forever feel the love and warmth she left with us".

In lieu of flowers, donations to the family for funeral costs can be sent to Timothy Sanderson ll or Taylor Seghetti Orr via facebook messenger, or venmo @taylor-seghetti-1