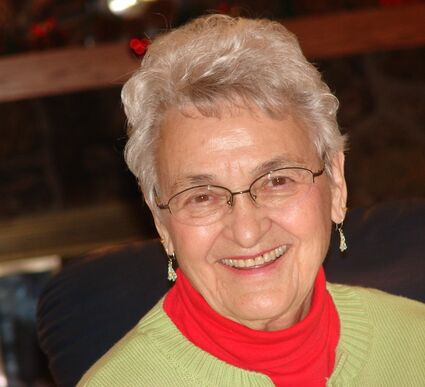 She was born May 2, 1929 at Midwest WY, her family moved to Thermopolis shortly thereafter where she lived the rest of her life. She passed away on December 17, 2022 in Bozeman, MT, at the age of 93. She was living at the Spring Creek Inn Memory Care Community.

She was married to Willard Wilson in 1947, and they were married for 67 years. Her life centered around him, and she missed him dearly when he died in 2014. They had been childhood sweethearts since she was 14.

She and Willard raised two children, Jim (born in 1949) and June (born in 1950). Family was her life, and she encouraged and helped them in their many endeavors in their childhood and adult lives.

She belonged to many organizations and was very active in most of them. She was a lifetime member of the First Baptist Church, teaching both children (starting when she was a young teenager) and adult (1975 – 2001) Sunday School classes and Vacation Bible School. She had perfect church attendance for 17 years. She was a member of the Wyoming Republican Party, the Hot Spring County Pioneer Association, the Hot Springs County Historical Society, Wyoming Stockgrowers Association and Farm Bureau.

Maycle did the books for the farm, cattle buying and bull business that she and Willard owned and kept them balanced to the penny. She also served as a chauffeur for Willard as they travelled nationally and globally, and she wasn't afraid to get there fast. She drove to Montana for her 90th birthday, explaining that she was turning 90, not driving 90.

She and Willard loved to travel travelling to France, England, Scotland, Switzerland, Belgium, The Netherlands, Germany, Turkey, Australia, New Zealand, Canada and Mexico, some being for the cattle business, and some for the fun of it.

Maycle was fastidious in all areas of her life – her appearance, her home, her work, her commitment to others, and to her faith.

Her faith guided her throughout her life. She served her church community for many years and at 93 delivered Meals on Wheels to the "elderly". She enjoyed music and sang in the choir for many years. She could whistle and often whistled a tune while she worked.

Maycle enjoyed spending time with her grandchildren and great-grandchildren, and was always available to play board games and give her full attention. She could also be counted on for plenty of licorice and gum balls, which will never be forgotten.

Not only was Maycle kind, faithful and thoughtful, but also loyal, driven and productive. At 90 she felt guilty if she hadn't accomplished much by lunchtime. She was a good friend to many, both in the church and outside it, still baking cookies and delivering them to friends and neighbors.

Service was something Maycle valued, and that she excelled at. She will be dearly missed by all those who loved her.

She was preceded in death by her parents John and Eunice Boyd, her husband, Willard, and her siblings Berta Jean Purcell, Doris Fisher and John Boyd.

Memorials can be given to the First Baptist Church at Thermopolis, Hot Springs County Senior Citizens Center, Wyoming Stockgrowers Endowment Fund or the organization of your choice.