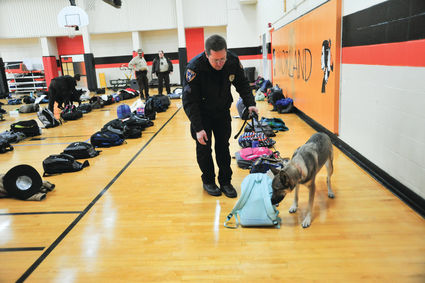 Lander Police Sgt. John Cunningham, dog handler for Sable, searches backpacks and other student property at the start of school Thursday as a precaution after a bomb threat was found written in a bathroom stall. At left in the photo is fellow detection dog handler Melony Hoffman from the Natrona County Sheriff's Office with her K-9 Koal.

WORLAND - A bomb threat written on a restroom stall and discovered about 4 p.m. Wednesday resulted in an evacuation of Worland High School. Concerns over the threat also resulted in students and staff entering the high school Thursday morning with law enforcement and bomb-sniffing dogs, ensuring the safety of those entering school.

According to a press release from Washakie County School Distri...