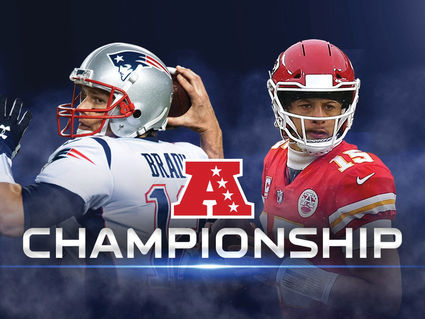 The Courageous Divisional round picks turned out better than the Wildcard picks, going 3-1 straight-up and, again, 2-2 against the spread. But that one loss in the straight-up record is a heavy loss. The Chargers went Chargers, doing what they do best and disappointing everyone. I'm sure even the Pats were disappointed, they put in two weeks of work, expecting a dogfight and LA doesn't even have the courtesy to play to their potential.

Watching the rewind of that game it really looked like the Chargers thought they could go into Foxborough and outmuscle the Pats on talent alone. That approach works in the regular season, although in the postseason it's probably a good thing to scheme a few things here and there. I could complain about the Chargers and their no-show against the Pats for another 500 words, but enough about the nots, let's move on to the haves.

There are only three meaningful games left in the NFL season and the goal is to salvage the Courageous Picks by going a perfect 3-0 in SU and ATS. The probability I've jinxed myself with that goal is extremely high. No matter, I'm going to tackle these final three games with the passion and urgency that Worland does with a french fry food truck. (Seriously Worland, I went to Mile High Fries at 1 o'clock thinking I'd be able to avoid the longest lines. I was partially correct, there were no lines but that was due to everything being sold out. Not even a smushed up fry left. It's alright, lesson learned. Next time they stop in Worland, I'm camping out like a tech nerd waiting for the latest iPhone.)

Now on to some picks!

The Saints have been getting a little too much love this week. They didn't dominate the Eagles and the game really came down to four things.

No. 1 Saints DB Marshawn Latimore first INT, the Eagles were driving up 14-0 and Latimore made an amazing play to give New Orleans life.

No. 2 The Saints converting on fourth and short in their own territory, following the Latimore pick.

No. 3 Eagles DT Fletcher Cox getting hurt and having to go in and out of the game.

No. 4 Eagles WR Alshon Jeffery's drop that led to the game-sealing INT.

Credit to the Saints for taking advantage of the breaks but if either of those four things goes in favor of the Eagles, especially No. 2, we're still talking about the magic of Nick Foles.

Meanwhile, the Rams handled the Cowboys in the divisional round and everyone is brushing it off in favor of gushing over the Saints. The lack of respect for the Rams comes down to the media's love of the Drew Brees narrative, wanting so badly to put him in the Super Bowl for all the easy story ideas, and pushback against Rams head coach Sean McVay's genius for all these head coaches getting hired because they met him one time.

The last time these two matched up, in New Orleans, the Saints won 45-35. McVay made a bad decision opting to run a fake FG on fourth-and-four at the NO 16, then compounded that bad decision by challenging the spot of the ball, which he lost. After that, the Saints went on a 21-3 run to take a 35-17 at the half. LA did fight back and even tied the game at 35-all early in the fourth but they ran out of steam afterward.

This time around, McVay isn't going to make the same mistakes and for all the love around Brees, he really isn't that scary at this point in his career. I think the Rams would love for Brees to return to his gunslinger ways, anything that lessens the impact of the Saints RBs is a win for them. The Rams go into the Superdome and walk out the victors.

It's important to be reflective during losses and other than overlooking the Brady/Belichick angle, I think what cost me the most in that Pats-Chargers game was overrating the Charger WRs and underrating the Pats secondary. Stephon Gilmore and crew are damn good and they outplayed the Charger WRs. I'm not as confident they can do the same against the Chief WRs but I think they'll be able to make them work for it.

After last week's debacle picking against the Pats is risky, but I'm not falling for the recency bias. What makes this game different is the Pats are on the road and their history in road playoff games during the Brady/Belichick era playing is not stellar.

The Brady/Belichick duo are 3-4 in road playoff games and when you really break it down, they are 2-4. In '01 Drew Bledsoe won the game for the Pats when Brady went down with an injury. Three of their four losses were either by Peyton Manning led teams in '06, '13 and '15 or against Denver in '05, '13 and '15. So in order to beat the Pats on the road in the postseason, you need high-elevation and/or an elite QB. Good thing for the Chiefs, they have one of the two with Patrick Mahomes under center.

It will be interesting to see what New England does with the coin toss if they win. Normally they defer so they can go for the double-up score when they close out the first half with points and open the second half scoring points.

Against the Chargers, Belichick wanted the ball first and it helped them set the tone. Considering how good the Chiefs are - the best in the league - in scoring on their opening first two drives, the Pats could take the ball first. Or maybe Belichick reverts back to his double-up strategy and if they can get a lead in the second half, they'll be able to milk the clock with their running game.

The Chiefs defense played better than they had all season against the Colts, they dominated a good offensive line and pressured Luck without having to blitz. I doubt they'll be able to do the same against Brady, but if they can get some hits on Brady, particularly in the second half. That's should buy Mahomes just enough time to give KC the lead and they'll hold their breath from there.