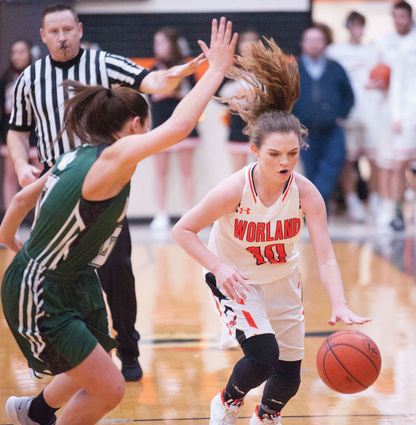 Down 53-42 to the Lander Lady Tigers with 90 seconds to play Tuesday night at Lander Valley High School, the Worland Lady Warriors girls basketball team went on a 9-0 run to cut it to 53-51 with 5.1 seconds left. With the ball at halfcourt, the Lady Warriors ran a play for sophomore forward Darla Hernandez but Hernandez was covered. Option No. 2 was sophomore guard Tymberlynn Crippen in the corner who had a good look from three to win it.

"We had two options on that final play," said WHS girls basketball coach Ben Hofmann. "We had Darla on a post-up on the block, that was the first look to tie it. She was open for a minute but it closed up pretty quick and there was a lot of ball pressure on Alexa [Caballero] and I don't think she could see clearly. So we swung it over to Tymberlynn and she got a good look in the corner."

Added Hofmann about the 9-0 run, "We got some steals out high and that led to some transition buckets. We ramped up our defense and unfortunately, it was a little too late. I think if we have another minute on the clock we win that game."

Part of the reason the Lady Warriors had to attempt a frantic comeback was another third-quarter letdown. Lander outscored Worland by 11 points in the third and most of that was due to multiple second-chance opportunities off offensive rebounds.

Coming out of halftime has been a struggle for the Lady Warriors this season and it's one that Hofmann takes responsibility for.

"In the third quarter alone we were minus-11. Rawlins on Saturday killed us in the third quarter and that comes down to coaching. I have to do a better job of coming out of halftime with either called plays or a couple of defensive sets," said Hofmann. "We need something that we can do to improve our third-quarter performances because against Lovell we were up 11 and by the end of the quarter, we were up one. The third quarters have really hurt us several times this year. I need to do a better job of having us ready to play coming out of the locker room."

Along with avoiding those third-quarter speed bumps, Hofmann wants to see his team get better on the defensive end. All game long, the Lady Warriors gave up far too many easy looks and if they can shore up their defense, games like Tuesday night's likely swing in their favor.

"We need to make our own breaks, we have to be better defensively. We're giving up too many easy looks on defense and not following what we practice. I've got to do a better job of putting us in a better spot defensively. We scored 51 points, and I like to think that's enough that we can win a lot of those games. We didn't shoot particularly well from the field but we did from the free-throw line. We've just got to be better defensively," said Hofmann.

Hernandez led Worland in scoring and rebounding with 15 points and 8 rebounds. Crippen was second in scoring with 10 points and Kate Wassum had six of the Lady Warriors 10 steals on the night.

The Lady Warriors next game is a home contest against the Hot Springs County Lady Bobcats Friday at 5:30 p.m. at Worland High School.