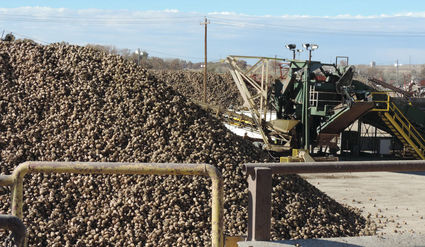 WORLAND – Wyoming Sugar announced this week that they have made 1 million bags of sugar, on this their 102nd campaign, and expect thousands more before the campaign is finished.

"The last time, I think it was the year 2000, when the factory was owned by Imperial, they produced a million bags and it was with almost 20,000 acres of sugar beets. This year we are over a million, we should get to about 1,050,000 bags, might be a little bit more than that even and we did it on just under 12,000 acres," Wyoming Sugar Company President and CEO Mike Greear said.

He credited the feat to the growers and employees of Wyoming Sugar. "My hats off to our growers and to our employees. The growers brought in a helluva crop with a high sugar content and our employees have done a wonderful job of getting it into the bins for us," Greear stated.

The sugar content of the sugar beets this year was just above 19 percent for company average and just under 33.5 tons harvested per acre.

"All I can do is try to make sure that we work hard here to keep all those jobs and our factory viable in Worland. This year was a good step in the right direction," Greear said.