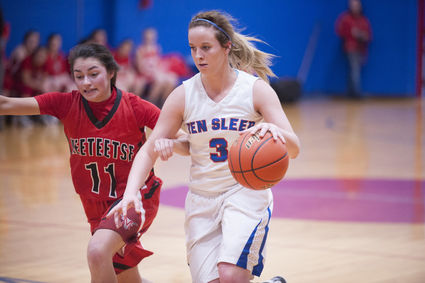 Lady Pioneer Bryley Moore pushes the ball up the court during Ten Sleep's game against Meeteetse on Feb. 2.

TEN SLEEP - As 1A girls basketball's top defense, the Ten Sleep Lady Pioneers relied on their stingy defense to pick up two big 1A Northwest division wins during a two-game homestand against the Burlington Lady Huskies on Feb. 1 and the Meeteetse Lady Longhorns on Feb. 2.

Holding opposing teams to an average of 27.9 points per game, the Lady Pioneers downed Burlington 44-32 and Meeteetse 34-22. Against the Lady Longhorns, Ten Sleep needed to rely on their defense to carry them through the 32 minutes as their offense struggled to fall through the basket.

The Lady Pioneers took plenty of quality shots against the Lady Longhorns but it was one of those games where the ball did not want to fall through the basket. On numerous possessions, they had shots rim out or touch every part of the rim before slowly falling out.

"There were discouraged at halftime because those shots kept popping out, but I reminded them they can't be discouraged because the only way we win is if we keep shooting," said TSHS girls basketball coach Sarah Novak when talking about the Meeteetse game. "We hit free throws down the stretch which was big because at one point we were 2 for 11. Free throws have just been a nemesis for us and we work on them in every practice."

At the end of the third quarter, the Lady Pioneers held an 18-16 lead but used a 16-6 fourth quarter to put the game away.

Nearly doubling their scoring output through the first three quarters in the fourth, was the result of the Lady Pioneers using their defensive pressure to get some easy scores and finally capitalizing on their trips to the free-throw line.

"Meeteetse played much better and have been getting better as of late. Defensively, we're going to make it happen and the front line of our press of Liz [Elizabeth Lungren], Lindsay [Holiday] and Bryley [Moore], they just made things tough for the Meeteetse guards. We had to rely on our defense and I don't think we took bad shots, they just weren't falling for us," said Novak.

No matter how they did it, getting those two division wins was crucial for the Lady Pioneers. With three games remaining, they have a tight hold on second place in the division and are only a game back from the first place St. Stephens Lady Eagles.

Another 2-0 weekend puts Ten Sleep in a great spot to take over first place, and at worst guarantees them a No. 2-seed for the 1A West regional tournament. The last time the Lady Pioneers went into regionals as the No. 2-seed was in 2013, which coincidentally was the last time the program made it to the state tournament.

That's been the main goal for the Lady Pioneers this season, making it to state. Last season they fell a game short but this season, with their lockdown defense, they can be among those final eight teams.

Novak said, "Two of our last three are on the road. Dubois we've never played well at their place. St. Stephens will come here and the last time we played them we played well in the first half but coughed up our lead and struggled to get back into the game.

"Our ultimate goal is to make it to the state tournament. We want to go into regionals with the highest-seed we can then we'll prepare when we get there. There are some really strong teams in the south with Farson-Eden and Cokeville. I think we're OK, we just have to take it game by game and worry about taking care of the things we can control on our end."

The Lady Pioneers travel to Dubois on Friday for a 5 p.m. game against the Lady Rams and on Saturday they host the St. Lady Eagles at 5 p.m. at Ten Sleep High School.