Warriors ready to go for 3A East conference meet this weekend 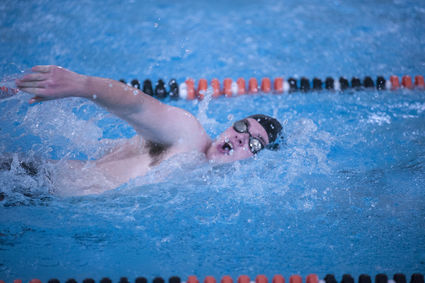 Warrior Andrew Nelson swims ahead during the 400-yard freestyle relay on Jan. 11 at the Worland Aquatic Center.

WORLAND - The postseason is finally here for the Worland High School boys swimming team, Friday and Saturday they will be in Newcastle competing in the 3A East conference meet.

Last weekend, in their final meet of the regular season, the Warriors were in Gillette for a Friday and Saturday meet at the Campbell County Aquatic Center. All but four of the boys swimming programs in the state were in Gillette last week, as most teams were looking to get a feel for the same pool that is set to host the 4A and 3A state meets in two weeks.

Having essentially all of 4A and 3A in Gillette, the Warriors were in the pool against some of the best teams and swimmers in the state. While the competition was tough WHS boys swimming coach Jeff Bishop thought his team did very well.

"It went well, very well. We spent two days in Gillette going against good competition. We saw some of our best times which was a surprise. They were sore and tired from practice and not only was it a tough week, but it was their third week in a row with three meets. So it was really good to see them compete in a fast pool against good competition," said Bishop.

After spending most the season trying to automatically qualify for the 3A State meet, Warriors Diamond Hill and Andrew Nelson had one final chance to do so.

Hill has been steadily cutting time in his 500-yard freestyle all season long. During Friday's meet, he shaved 12 seconds, leaving him two seconds shy from the qualifying mark. Having the motivation of cutting 12 seconds, Hill took to the pool Saturday and got his mark by dropping another three seconds and qualifying for state with a time of 6:23.45.

"On Friday, Diamond cut 12 seconds from his 500 and that left him two seconds from qualifying. His goal was to qualify and after cutting 12 seconds I told him he's got this," said Bishop. "Saturday we really got on his splits, he runs about 38-second splits but he had one 40-second split on Friday and that's what cost him. He went in and did his splits so even that he cut three seconds on Saturday. He's in there and that was great to see."

For Nelson, he's been trimming his time in the 200-yard individual medley with each meet this season. He wasted little time qualifying because during Friday meet, he hit the pool and logged a season-best 2:33.87, automatically sending him to state.

"It was neat to see him get that because he's been working on that all season," said WHS boys assistant swimming coach Justin Howe. "Diamond too, both swimmers have been shaving time all season to get to qualifying time."

Another Warrior swimmer that stood out in Gillette was Blake Mautz. Despite having to do in-water starts and open turns because he's on the mend from hip surgery, Mautz swam in the 50-yard freestyle and posted a 28.87, stunning his coaches in the process.

"The best race of the weekend was Blake going 28 seconds in the 50 free with an in-water start and open turn. Next year's going to be awesome, he's really going to shine," said Bishop.

Traeten Quigley and Zayne Cooper also had strong showings in Gillette. Quigley is close to hitting a season goal 100-yard butterfly and Cooper went under a minute in the same event.

With Conference this weekend the Warriors' two divers, Hill and Simon Dalebout, have prepared for 11 dives this weekend. Hill has already qualified for the state meet and this weekend will be the final chance for Dalebout to do the same.

Dalebout has progressively gotten better from week to week and having 11 dives this weekend, Bishop likes his chances at breaking the qualifying mark.

The way the schedule works out, having a week off between conference and state, the Warriors are not in full taper just yet. Bishop and Howe have cut back for practice this week as they prepare for conference.

The Rawlins Outlaws are the big favorites to take the 3A East conference team championship. They're a talented team but also have the numbers, as their roster nearly doubles the other teams in the field. Second place should be a competitive race and one that the Warriors plan on being in the thick of.

"We should see some cuts," said Howe. "We're not going to do a full-taper right now but we're going to slow them down this week so they'll have more energy for conference," said Howe. "We've got to swim well to get to second place. Rawlins has the numbers to take first and it's going to be tough to get second but we can do it," said Howe.

The Warriors results from the 3A East conference will be in next week's edition of the Northern Wyoming News.