APRIL 1 - Bigfoot sightings in Ten Sleep triple over the weekend

TEN SLEEP – Three supposed Bigfoot sightings prompted a series of calls to the Wyoming Office of Mountain Investigations over the weekend, as reported by WOMI Director Walker Smith to the Northern Wyoming News. 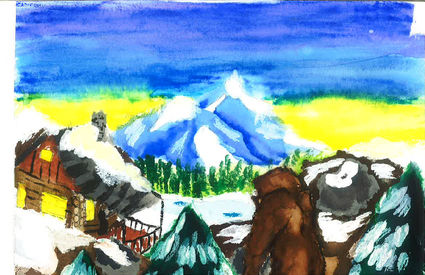 Bigfoot sightings in Ten Sleep increased over the weekend.

TEN SLEEP – Three supposed Bigfoot sightings prompted a series of calls to the Wyoming Office of Mountain Investigations over the weekend, as reported by WOMI Director Walker Smith to the Northern Wyoming News.

First, on Saturday, Dr. Narayan Khandekorrn with the Aboriginal Art Center of Boston, was leading a group of post-graduate students on a survey of Lakota bark art locations near Lost Twin Lakes, when their rental vehicle was attacked.

"The humanoid appeared to be rather capacious, as we could only see the midsection as it rocked our vehicle, and the smell was quite abhorrent," noted Dr. Khandekorrn. "It's guttural exclamations evoked the horror of [Claude] Debussy's 'La mer', and I would have attempted a recording, yet my students were clamoring and yelling quite loudly for us to depart. They have been on edge since we arrived in the Big Horns with the lack of cell phone reception, so I didn't push the matter and rather just drove off."

Estimates to the damage to the rental car are forthcoming.

Later that same day, John "Freewheelin'" Franklin of Kirby was doing some late-season ice fishing at Meadowlark when his shack was attacked.

"Man, I finally got some time off so I'm hoping to catch a few saugers, and this happens," said a frustrated Franklin, who ended up losing all of his gear and the collapsible shack, which belongs to his brother-in-law.

"I'm sitting there, it's cold as all get out and rocks start hitting the place. I figured it was some kids so I went on the ice and I'll be damned if this 'thing' was over on the bank, chucking basketball-size rocks at me," noted Franklin. "Man to heck with that, ya know? That thing was huge. I ripped it to my Jeep and left. Nobody has time for that."

At approximately 9:37 a.m. on Sunday, MidWest Trucking driver Alejandro Padilla was on his route to deliver a delivery of macaroni and cheese to Jackson, when his encounter unfolded.

"My brakes were a bit hot so I stopped up above the switchback to let them cool off, and I was standing out there watching some rock chucks run around, when this thing stood up and stared at me. I always figure that bigfoot stuff was just crazy TV stuff, but man that thing was too real," said a startled Padilla.

"I'm done with hauling noodles. This is the third weird thing I've seen and I'm just going to quit and get my old job back hauling equipment in Afghanistan, " noted Padilla. "It was safer and it had dental."

Both the Washakie County Sheriff's Office and Wyoming Highway Patrol had no comment on the ongoing investigation of the sightings, and could not verify if they are related to the clown sightings around Deer Haven the last two summers.

John Walking Horse, a Shoshone historian in Riverton, still believes the sightings of Bigfoot and the clowns are related, and possibly of an ancient origin.

"Look, I told you last year, Chief Washakie forbad hunting in that area, due to the Black Spirit Lodge Cave up there," said Walking Horse. "There are all sorts of shapeshifters in the Big Horns. It's best to just leave them alone. Especially them damn clowns."

Taking a break at the Big Horn Bar, seasonal ranch hand Wyatt Poke Malloy of Driggs, Idaho, remarked that the sightings are not that uncommon in April.

"I been working all across the West for near 'bout 37 years, and this happens all the time around calving season," drawled Malloy. "Something gets their hackles up in April, but you carry a few packs of bologna in your outfit and you'll be alright. Just throw it and run. Them things love bologna."

Editor's Note: The staff of the Northern Wyoming News wishes you a very safe and happy April Fools Day.