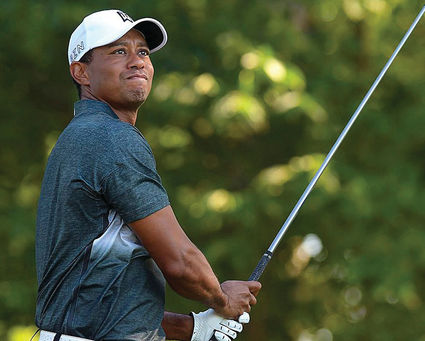 One of the more entertaining things about social media, while also slightly annoying, is the pushback. No matter the topic, person or place, there is always going to be a pushback. Then you can expect pushback to that pushback, followed by more pushback to the pushback's pushback. It's a good ole' pushback paradox.

Tiger Woods' snapping his 11-year major drought is excellent proof of the pushback paradox. When Tiger claimed his fifth Master's and 15th career major victory last Sunday there was absolute euphoria for the golf world and Tiger fans. People were jacked for Tiger and it didn't matter where your personal creed lies. Even Presidents Obama and Trump were ecstatic for Tiger and congratulated him within minutes of each other.

Naturally, the discussion about Tiger's win being the greatest comeback in sports history started to pop up. This is when the pushback started because people began bringing up his past with the infidelity, prescription drug abuse and his jerk behavior. The anti-Tiger people said it can't be a comeback when all his misgivings are self-inflicted and he hasn't shown any remorse or accountability.

Rather than rehash the remaining pushbacks, I'm going to put this out there. Why can't both be true?

I know it's easier to turn things into a black or white issue but in reality, there are a handful of things that are actually that simple. Most everything else lies in some grey area, which is perfectly fine.

As a Tiger fan, seeing him raise another major was incredible and an All-Time sports moment. I know most are going to associate his comeback with the crumbling of his personal life in 2009. But I argue that really only lasted a few months because in his following two majors in 2010, the Masters and U.S. Open, he finished tied for fourth.

What really broke him during this 11-year major drought were the injuries that kept piling up. His back and knees went to hell on him and those body parts are pretty, pretty, pretty important if you want to enjoy golf or life.

It was one injury after another for Tiger and you could chalk that up to his desire to train with the Navy SEALS, more on that later. Or maybe it was just the combination of normal wear and tear of an aging player.

Either way, those injuries affected him the most during the drought and for him to overcome that is a terrific sports story, it's the stuff Disney sports films are made of.

But as a rational Tiger fan, I recognize he has been a turd for most of his career, especially at the peak of his powers. He was terrible to fellow players on the Tour, overly sensitive to the media and just outright arrogant. Had he not been so awful during his prime, I guarantee that the reveal of his multitude of marital transgressions wouldn't have been covered with such glee and self-righteous pontificating from the media.

Also during his prime, Tiger started training with the Navy SEALs to which ESPN's Wright Thompson went into great detail about. Most point to Tiger not picking up the bill one night when out to dinner with several SEALs as Tiger being a jerk. But that's explainable because Tiger has always been cheap, even with other multi-millionaires. The weirdest part about Thompson's story was Tiger trained so much with the SEALs that his own camp was worried about him.

They were concerned that Tiger was going to confuse the SEALs inviting him to train with them, with thinking he could actually become a SEAL. They just let him do all the fun stuff like jump out of planes and simulated raids, he never really attempted any of the difficult training.

Still, it is weird for a guy at his absolute apex, becoming obsessed with something that didn't bring him to the mountain top. And you know when Tiger wasn't around any SEALs or military people he was talking up how he could be a SEAL if he ever left golf. And people like that are just annoying.

Tiger's flaws aren't a big deal for me because I like it when sports stars have blemishes because it shows they're human. It's irritating when superstars, especially in this era of brand building, try to present themselves as flawless human beings, and it's absolutely boring.

Superstars that try to make you think they're immaculate are essentially Superman. While that might seem to be a badge of honor, it's not. Want to know why Superman movies suck? It's because the protagonist is perfect with no character flaws. Green space rocks make me sick. And!? It's impossible to relate to a character that is perfect in every way.

(This is where Marvel Films doesn't get enough credit, their Superman, Captain America, could have been just as boring but they were able to weave in human emotion into the character. Because of that, it has made Cap the best Avenger of the group.)

Yes, Tiger Woods has a lot of warts and was a jerk for a long time, but his win on Sunday was incredible and is among the greatest comebacks in sports history.