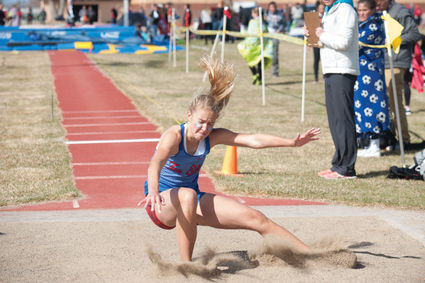 TEN SLEEP - The 1A West regional track and field meet is next week in Shoshoni but before getting to the postseason, the Ten Sleep Pioneers and Lady Pioneers have one final regular season meet before they can turn their focus toward Shoshoni.

Ten Sleep is in Thermopolis Friday for the Bobcat Invitational to close out their regular season. Last week Ten Sleep was in Buffalo for the Buffalo Twilight meet. Along with Arvada-Clearmont, they were the only 1A schools competing against 4A or 3A teams.

But as they have done all season, Ten Sleep showed just because they are in 1A that doesn't mean they can't compete with some of the best athletes in the state.

"We did very well and there were so many teams there," said TSHS track and field coach Desiree Egger. "With these bigger meets, it's nice to go and make a name for yourself. When we go into meets like that, they [other teams] know what Ten Sleep can bring to the table and it is fun to see our kids compete in each race or field event."

For the Pioneers, Boe Nichols continued his impressive sophomore campaign finishing fourth in the 800 meters, running a 2:08.51. Then, freshman, Tim Nichols placed sixth in the 400-meter dash running a 56.22.

As one of the smaller schools in the state, in terms of school population, the Ten Sleep athletes are not shy about going to a meet where they will run into some of the bigger 4A and 3A schools in the state. In fact, it gives Ten Sleep some extra motivation to prove that they can compete.

"That's what's special about track just because you are from Ten Sleep or a small 1A school if you work hard enough you can win races and events against 4A schools. We are just as capable and are able to show that on the track," said Egger.

The focus for this week in Thermopolis is to keep improving and hopefully, get a few more athletes qualified for state. Egger has a few athletes Molly Charney, Elizabeth Lungren and Tim Nichols ever so close to hitting the qualifying marks in their respective events.

Even if Charney, Lungren and Nichols just miss out on qualifying, the good thing is they still have regionals next week to make it to state.

"Obviously, we'll focus on individual events. We're still looking to get some kids prequalified and have a few that are on the cusp. Liz Lungren is one of them, Molly [Charney], Tim Nichols are all right there. We've reminded them even if they don't it's OK because we've still got regionals. We'll be competing against 1A schools then and they'll have an opportunity to get to state that way," said Egger.