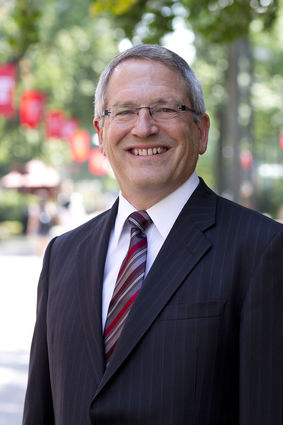 LARAMIE - Neil Theobald was named the University of Wyoming's acting president, as of July 1, by the Board of Trustees on Monday morning.

Theobald has been the university's vice president for finance and administration since July 2018, and told the Laramie Boomerang on Monday that he's "thrilled" to take on the new role.

"I'm just honored for the trust the board has placed in me," he said.

In the past year, Theobald has taken a leading role on the university's major projects, like the creating of UW's campus master plan and planning for more than $300 million worth of new dorms.

Theobald told the Laramie Boomerang on Monday that he'll need to delegate some of his current responsibilities to other employees as a result of his new appointment.

"This is the best group of people I've worked with," he said. "I have fabulous colleagues. ... We'll continue to work as a team, but they'll probably have to pick up more of the load since I'll be doing some other things. I have absolute confidence in (Director of Operations) John Davis, (Associate Vice President for Budgeting and Finance) David Jewell, (Facilities Construction Management director) Matt Kibbon, (UW architect) Matt Newman, (Budget Office director) Alex Kean - these are fabulous people. I am really confident, given the great group we've got, that the master plan, housing, and everything will continue to move forward."

Theobald said he fully expects to take on more of the outreach and ceremonial roles usually accompanying a presidency.

"There's a huge external role, and it's a crucial role," he said. "All of us who work at the university know what's going on, but for people not at the university, we need to explain to them what we're doing and why we're doing it. We need to be out interacting with business leaders, parents and people in the community to understand how we can be helpful. This is not a job you can do sitting in your office. ... I plan to be out around the state and making sure I know what folks of Wyoming need from us."

Before coming to UW, Theobald was senior adviser to the president at Indiana University, where he was a tenured professor for two decades and also served as CFO from 2007 to 2012, senior vice chancellor from 2002 to 2007, and director of the Indiana Education Policy Center from 1993 to 2002.

From 2012 to 2016, he was the president of Temple University, a time of numerous successes at the Philadelphia university. Theobald eventually became the nation's fourth-highest paid university president in the 2017 fiscal year, when he earned a base salary of $1.4 million, according to Chronicle of Higher Education.

During his time at Temple, annual research funding by 55 percent to over $250 million per year, which led the Carnegie Foundation to upgrade Temple to its highest research activity classification.

However, Theobald resigned under pressure in 2016 after Temple's board of trustees took a vote of no confidence in the president, according to the Philadelphia Inquirer.

After Theobald fired Temple's provost using a rationale the university's spokesman described as "absurd," Temple's board made plans to fire Theobald himself and issued a public rebuke that wasn't just limited to the provost's hiring. The board issued a statement at the time, stating "that the issues arising from the discovery of a $22 million deficit in the university's financial aid budget ultimately were the responsibility of President Theobald, and that he must be held accountable."

Despite that, UW's press release announcing Theobald's appointment on Monday's morning includes praise from Larry Kaiser, dean of the Temple's medical school, who said UW's trustees made an "inspired choice."

"Neil is a superb administrator and communicator who relates well to faculty, staff and, most importantly, to students," Kaiser said in the press release.

At both Indiana University and Temple University, the four-year graduation rate rose above 50 percent during Theobald's time there. Theobald told the Boomerang said he hopes to use those experiences to improve UW's graduate rate.

"Something we did a lot at both Indiana and Temple, is making sure that students graduate on time in four years," he said. "The strongest predictor of how much it's going to cost you to go to college is how long it takes you to graduate."

"That's an area I'm really focused on - making sure sure get kids in the right classes, keep them moving forward and get them out in the labor market or off to graduate school in four years," Theobald said.

Theobald said he views his main responsibility over the next year as "setting up the next president for success."

He said his top priority will be to provide "excellent education."

"That's our high mission at the university and it's clearly what the state of Wyoming counts on us to provide," he said.

Since Theobald's background is in education finance, and he said he'll also focus on ensuring UW is affordable and accessible.

"I think there's a lot more that we can do financially to bring a UW education to more students, and I've worked on this for 35 years," he said. "We know that not everyone in Wyoming can come to Laramie, but we can go to them with distance education and partnerships with the community colleges."

"I think that's something I'll clearly do again," he said.

The trustees voted unanimously Monday to have Theobald replace outgoing President Laurie Nichols at the end of June. Only trustee Mel Baldwin was absent from the conference call meeting.