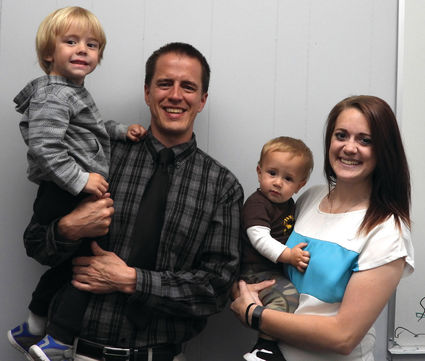 Krew Collins, age 2, is held by his father Levi Collins, with Kace Collins being held by his mother Savanah Collins, who is pregnant with quintuplets.

TEN SLEEP – For most couples, learning that they are pregnant, is an exciting event. Ten Sleep residents Levi and Savanah Collins received five times the excitement recently when they learned that Savanah was pregnant with quintuplets.

Savanah, who is just a little over 13 weeks pregnant, learned during an ultrasound that she was pregnant with more than one baby. "Had a regular ultrasound, just a regular check-up and they said that this isn't what it should look like. It was the nurse that said, 'This isn't what we want.' Which kind of freaked me out, but I know that they know what they are doing so. But that's not the way to start an ultrasound. She [the nurse] said there are more babies in there then we would have hoped for. She brought in the doctor and started showing the ultrasound," Savanah said.

Levi added, "Originally they thought that there were four. They saw five sacs but only four heartbeats the first one [ultrasound], but she was barely pregnant. We have now confirmed that there are five, we've seen all five heartbeats."

When asked how they felt about the idea of having five babies at once, the couple said, "We will just take it as it comes, it's about all we can do. Use whatever help we can get and take it day by day. I'm sure it's going to be an overwhelming situation, that we are going to have to have help with and take it as it comes. There are other people that have done it, hopefully we just adjust and accomplish."

The couple already has two sons, Krew age 2 and Kace who is almost a year old. Both boys were conceived with the help of fertility drugs. Levi explained that they tried for three or four years before consulting a fertility specialist. Even with the help of the specialist the pregnancies were risky because Savanah was prone to miscarrying.

Because of the numerous miscarriages, being pregnant with five babies, which is high risk for anyone, is very high risk for the Collinses. So high risk that Savanah will have to spend the greater part of her pregnancy on bed rest in Salt Lake City, Utah, either in the hospital or at a Ronald McDonald house close to the hospital.

Savanah is scheduled to start bedrest in August, which has given the couple a cause for concern since Levi, who is the Ten Sleep School principal, starts back at work around the same time. The couple's main concern is their two boys, who since birth have only spent one night away from mom and dad.

Due to the fact of the couple's history of miscarriages, they have gotten only a few things in preparation for the big day. "We have kind of been postponing everything because it's such a very high risk pregnancy and baby stuff is expensive. Obviously we hope for the best and pray for the best but we figure at this point it is best to not buy everything right now when we don't know what is going to happen in such a high risk situation," the couple said.