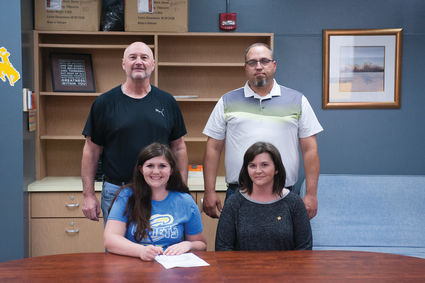 WORLAND - Recently graduated Worland High School senior Rachael Carver signed her letter of intent on May 28 to continue her education and golf for Cottey College in Nevada, Missouri.

Golf was not at the forefront of Carver's drives when looking for a college but once Cottey offered her to a scholarship to play golf for them, she gladly accepted.

"It's a P.E.O. (Philanthropic Educational Organization) college, my mom is actually a part of P.E.O. and it just kind of worked out that I found it," said Carver. "I wasn't necessarily actively going to seek out golf but it just kind of happened, and I was thankful for the money."

Cottey's head coach Eric Cameron heads the program which began competing in the 2017-18 season. Carver noted how Cameron said he'd help her improve and Carver's high school coach, Chad Rose, who also had the opportunity to talk with Cameron, agrees.

"I'm excited for her," said Rose. "Like I told her coach [Eric Cameron] when she gets to dedicate herself more than the six-week season that we've been having because she's more of a fall player with the musical in the spring, she's going to grow by leaps and bounds. She'll be in the mid-80s by the end of the year.

Rose continued to talk about Carver and how she'd develop her game while at Cottey.

"She has the length to compete, really, at any level. Her short-game has been pretty good, I think once she builds some consistency in her iron play she'll be a lot better. She'll also go from one coach and 25 players in the fall to one coach and four players in the fall. That's going to give her a lot of attention. He couldn't be getting a better kid, she's just a top-notch student and I've been able to work with her in that and she's a leader in that as well."

As for her expectations golfing at the collegiate level, Carver knows it's going to be a challenge but it is one she is ready for.

"I think it will be a lot of work, I'm up for the challenge and I'm ready to get paid to go to college," said Carver.