Loud and proud in Wyoming 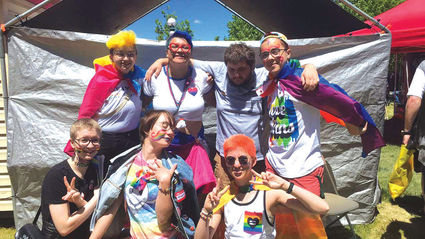 This weekend, I had the honor of experiencing something new for myself and plenty of others.

Though I have known this about myself since the eighth grade, this weekend, I learned that this isn't something I need to hide; at least, not anymore.

June is known for plenty of things, but, most significant to me and many, many others, June is known as National Gay Pride month.

I hid who I am from most people for years, only coming out to a few family members, but mostly close friends.

Casper PRIDE is an organization dedicated to educating, supporting encouraging and advocating quietly and growth for a supportive and tolerant community. They hold a festival every year, celebrating and honoring the LGBTQ+ community in Wyoming.

This year, I attended with a group of close friends.

I had really high hopes for this weekend. I spent two months planning the days down to the very core. This, after all, was my first pride festival, along with a majority of the group who I went with.

I can't say I was expecting everything to be perfect, but, somehow, it was.

The PRIDE festival opened up my eyes regarding a lot of things.

There were so many groups of people, all whom were so unique and diverse from another. Everyone had been so friendly and caring, even to others whom they just met. I had no idea that there was anything like this in Wyoming. I found myself wondering, "How can such a diverse group of people make up one community?"

Interacting with new people or functioning in large groups of people has always been extremely difficult. Somehow, I didn't feel that when I was there. I felt like, with this group of people, I could be myself, no matter what. I knew that these people were like me in a lot of different ways, and that I could interact with them without me thinking they found me irritating, or unbearable.

At this festival, it was shocking to see everything I did. I met same-sex couples who shared their stories with me, who had grown old together and had fought for equal rights. I saw other couples who seemed so happy together, who weren't afraid to show the world who they love. Overall, for someone who had been hiding from her own truth for so long, who didn't think that she'd ever be able to experience something like this, it was inspiring.

I met others who had been part of countless equal rights movements, those who grew up where loving who they did was unthinkable, others who were turned away by their family and their friends for who they loved. They had done so much for those in Wyoming, to blaze a trail and give other members of the LGBTQ+ community a safe space, they fought for the right to love who they love and to receive the same rights as straight couples.

As ridiculous as it sounds, I felt humbled to be in their presence. These amazing, caring people were part of a movement to ensure that I, along with so, so many others, would be treated as equal. They assured that I could be proud of who I am and that I could stand up in front of anyone and proudly state "hey, I don't just like guys" without receiving unmentionable ridicule.

On the drive home Sunday night, my mind continued to wander through the names of these amazing trailblazers. I can't even think about where I would be without them fighting for our equal rights. Heck, I can't even imagine it. Thanks to these people, I finally understand that who I am isn't someone to be ashamed of. It brought up the fact that my sexuality, my identity, doesn't define me. That, no matter what, I can be who I am and love myself for it.

In honor of those who lead the way and those who may not feel safe enough, or who aren't ready yet, I'm officially coming out as pansexual, and I'm not ashamed about it.

Cyd Lass of Worland is a staff writer for the Northern Wyoming News.