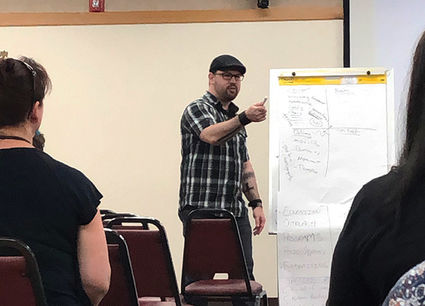 Guante talks with the audience and answers questions at the Big Horn Basin Children's Summit in Worland, Wyoming June 12, 2019.

WORLAND - Starting with something as simple as a handshake, Kyle "Guante" Tran Myhre brings real life problems to light through spoken word.

His performance on Wednesday night, June 12, in Worland, as part of the Big Horn Basin Children's Summit, sought to inspire an audience and give the community a chance to hear some of his poems that he has performed all over the country.

"Those that stuck around for Guante got a real treat," Summit organizer Bob Vines said. "His work is incredibly powerful and emotional, and the time he spent after his performance talking with people really showed how down-to-earth he really is."

His performance was a collection of his poems that have been performed many times, as well as a new one he is attempting to perfect.

Even though he has been performing for years that does not mean that he does not get nervous before performing on stage.

"I am still kind of an introvert so there is a little bit of nervousness when I get up on stage even though I have done this a thousand times," Guante said.

Writing has always been a process that has intrigued Guante, and he discussed what that process was up on stage with the crowd on Wednesday night.

He discussed how he begins with a topic that he is interested in writing about, and how he breaks that topic down and begins to dive deeper into the subject, rather than spreading the poem over multiple topics. As he went on to say, "Poetry is all about looking at a moment, and reaching inside it."

Sometimes it seems like it may be difficult to get the courage to write and share your craft, but that does not mean that you should not continue to write, according to Guante.

"The most important thing that I can say is to continue to write," he said.

The event helped reach multiple people within the community, as well as people that came from out of town to attend the summit.

The Big Horn Basin Children's Summit took place on Wednesday and Thursday, June 12-13, and had 142 people in attendance over the two-day event.

This event covered a wide range of topics regarding helping the youth of Wyoming, and different techniques that can help foster the youth of tomorrow to have successful futures.

"We really put a lot of thought into the people and topics we brought here for keynotes and breakout sessions," Vines said. "We wanted to provide information about adverse childhood experiences (ACEs) and the prevalence of these kids in our communities, as well as powerful personal stories."

These keynote speakers brought in many different ways to help the youth have a voice. Guante discussed how spoken word can help express what has happened to someone come forward and be honest. While Todd Garrison provided a course he believes should be essential for future teachers to take to be ACE certified and help recognize these effects at a young age.

The final keynote testimony from Kailyn Cook, an abuse survivor, who brought an eye-opening experience to the summit, and helped everyone realize that society are not where it should be yet.

"Kailyn Cook did not just focus on how so many systems failed her, but she opened a discussion on what we need to do to close service gaps and provide systemic changes," Vines said.

The summit took place over a two-day period, but Vines hoped that it had been able to go on just a little bit longer.

"I think we asked an awful lot of our conference attendees," he said. "If we were to do it again, I think we would extend it to two and a half days, or scale back some of the extras."

Overall the event was seen as a success, and Vines has been grateful for the feedback that he has received so far.

"The initial feedback we received was far more positive than we could have hoped for," he said. "Our goal was to begin the discussion of how we become trauma-informed in all areas of our community and we had all areas of the community represented."