Wildfires 18U team adding depth to their ranks 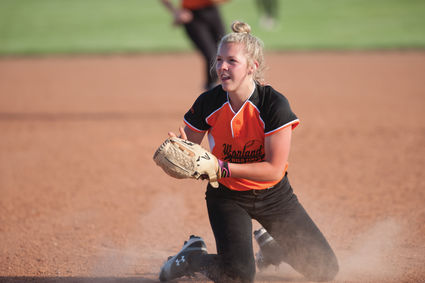 Wildfire Sayge Mascaro gets in the dirt to field a ball during a June 4 game against Cody at Newell Sargent Field.

WORLAND - Depth is an important ingredient for any team and for the Worland Wildfires 18U girls softball team their reserve players have been getting some solid playing time the past few weeks.

Originally, the Wildfires were to play in a Green River tournament last weekend but when that tournament fell through Wildfires coach Dave Coronado worked out a one-day tournament against Greybull and Lander on June 15.

Coronado was missing five players for Saturday's games against Greybull and Lander, which included three of his top pitchers Zoe Fernandez, Brooke Hellyer and Rylee Wagner. As a result, he turned to Winnie Smith and Ivey Roberts to help the team get through those games.

Both Roberts and Smith performed well, as the Wildfires lost to Greybull 8-7 and beat Lander 12-5. Considering that Roberts is 13 years old and holding her own at the 18U level, Coronado was pleased with his pitching.

"It turned out pretty good," said Coronado. "We have 15 girls on the roster but five of the girls were gone and three of those five were our top pitchers. We had two girls step up, Ivey our 13-year-old did a fantastic job pitching. We lost by one to Greybull but we just didn't hit the ball."

Continued Coronado, "Ivey stepped up though, she went four innings and did really well. She had three strikeouts and only walked a few. We had bases loaded the first inning and with no outs and we were able to get out of that jam with no runs scored. Defensively, we made some plays and that was huge because our defense has been inconsistent until lately."

Smith and the Wildfires defense shutdown Lander in their next game and more importantly, the bats came alive.

Having this much depth in the bullpen is something new for Coronado. Not long ago his most reliable arm was Hellyer, then last season Fernandez and Wagner added their names to that list and this year he has Roberts and Smith to turn to.

"It's the deepest we've ever had. Two years ago it was just Brooke. Last year it Zoe and Rylee stepped up and this year Ivey helped us out. Ivey is phenomenal for a 13-year-old to be doing what she's been doing. She throws strikes consistently. Winnie throws real well, she's got a good fastball and change. She's hard to hit because she's consistently getting the ball in there at different spots," said Coronado.

Having that many reliable arms is a big boost for the Wildfires as they work toward developing the same level of consistency as they have on the mound to their bats and defense.

"I see a consistent confidence within themselves and in the pitching. It doesn't matter who is pitching they're all pretty focused. Rylee has improved dramatically and had several quality starts with three or four wins. The innings and pitches we're getting out of the pitchers have us all feeling confident. Now we just need to produce consistently with our bats and defense," said Coronado.

The state tournament, on July 11-13 in Casper, is three weeks out and Coronado is still looking for the right combination of players to play in the field and in the lineup. This weekend's tournament in Lander, on Saturday, should be another good opportunity to help figure out the optimal lineup and defensive assignments for state.

"I'm not completely satisfied and pleased with where we're at right now. We've played 21 games and we're 12-9 but we should be better than that," said Coronado. "I'm not really concerned about that because the adjustments and changes we're going through. We're looking for the right combination for state and if we can get this hammered out in the next couple of weeks we're going to be tough at that 18U level."