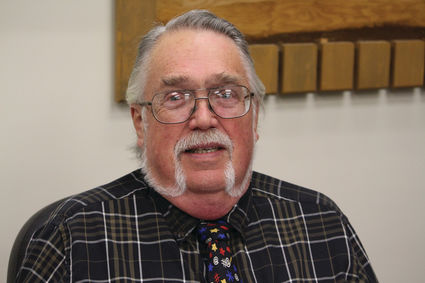 Koch, 70, passed away Thursday, June 27, at his home in Worland. Memorial services will be at 11 a.m. Monday, July 8, 2019, at Grace Lutheran Church in Worland, where Dennis was an active member.

Koch worked 35 years as the circulation manager for the Northern Wyoming Daily News from 1979-2014. Longtime publisher Lee Lockhart said when he arrived at the Daily News in 1989 he was happy to see a friendly face, having met Koch years ago when Lockhart was a senior at Shoshoni High School and Koch was a teacher at the Shoshoni junior high.

One of the first technological advances and new computers at the Daily News came to the bookkeeping office and the circulation department. Lockhart remembered that Koch "didn't ever fully love computers but he learned to work with them."

Over the years, Lockhart said he learned that Koch was a man of his word. "When he said he would do something he did it. You could mark it off as done because it would be accomplished. His word was his bond."

Lockhart added, "He was my righthand individual at the Daily News."

He said he and Dennis had a fun competition each day trying to be the first one at the office. He said Dennis wanted to be there to greet the customers.

Lockhart recalled one January morning when Dennis wasn't at the office and he got a call for Dennis' wife, Dolores. Dennis had slipped on his front step at the house and was at the emergency room but he needed Lockhart to come to the hospital because he had some message to give him.

"He just was remarkable in his dedication," he said. "He will be missed – My thoughts go to his family."

Lockhart said even though Koch was not teaching in the classroom anymore, Koch was always teaching. "He always liked to teach people. He would work with the carriers and their parents. He never lost the desire to help kids learn and be responsible."

Koch was elected to the Worland City Council in 2012. There were two openings for Ward 2 with Mandy Horath filing for one seat. The other seat was vacant for the primary election. Lockhart said Daily News staff members who lived in Ward 2 asked Dennis if he would accept a write-in nomination and he agreed.

"That was a good decision. He really like being involved," Lockhart said.

Koch received six write-in votes in the primary election in 2012. He garnered 650 votes in the general election, unopposed for his seat. He was re-elected in 2016.

He told the Daily News at that time, "I have greatly appreciated the opportunity of serving the constituents in Ward 2 for the past three and a half years. During that time, we, as a council, have worked well as a unit. Although we have not always agreed with one another, we have always returned to the council chambers with mutual respect for each other.

"We have accomplished much in cleaning up several outdated and/or irrelevant ordinances, primarily due to the diligence of [the late] Mayor [Dave] Duffy. We have seen the beginnings of [much needed] projects, most notably involving city streets and the city shop. The plans for improving drainage through much neglected curb, gutter and street repair seem to be taking shape. And, plans for a new or refurbished city shop are also progressing well. I would truly like to see these projects through to completion."

Mayor Gill said, "It was a privilege to work with Dennis. He didn't have a dishonest bone in his body. He would give it to you straight out of the barrel."

He said he always appreciated Dennis' honesty and forthrightness, noting he would always give you his opinion right up front.

"He was a hard worker and rarely missed a meeting. You could always count on him," Gill said.

Gill said he considered Koch a friend, knowing him well before they served on the council together, with his work in Extension and Dennis' work at the newspaper, and the two also worked together on the first successful one-cent sales tax committee.

"He wasn't just a colleague, he was a friend. I will miss him dearly. It's a loss we'll feel on the council," Gill said.

A full obituary can be found on Page 3 of this issue of the Northern Wyoming News.

As for the loss on the city council, Mayor Gill said they would have to follow procedure and declare a vacancy and open it up for letters of interest from residents in Ward 2. Gill said in an interview Friday that he expected that to occur at the Tuesday's council meeting.

Due to the early press deadline for the Fourth of July holiday, a report on the council meeting will be in the July 11 issue.