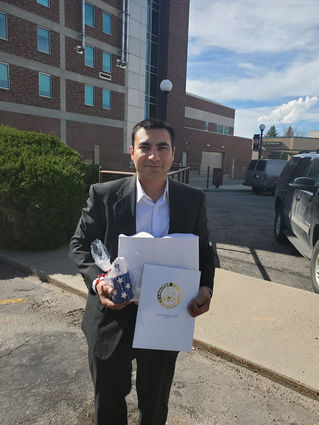 Emmanual "Manny" Davila poses with his United States citizenship certificate after receiving it at his swearing in ceremony on May 13, in Casper.

WORLAND – Sometimes it can be difficult to understand what it means to be an American citizen, but one Worland resident completed his journey a couple of months ago, and gained his full citizenship.

Emmanuel "Manny" Davila has had a long journey on the path to citizenship, but he finally completed his journey by attaining his citizenship for the United States on May 13, in Casper, along with 18 other people completing the oath and becoming citizens.

According to Manny, this long journey began when his late father, Jesus Davila, obtained a work visa to come work in the United States seeking a better life for his family. He worked during the summers in Worland to support his family back in Mexico, and he would return back to Mexico during the rest of the year to be with them.

Jesus then decided to bring his family along with him, through border passes, along with a permit that allowed his family to migrate along with his father to Worland in a legal manner. This meant that Manny then had a temporary citizenship, and could live a normal life in the United States.

From that point on Manny said he lived his life in Worland and went through high school just like any other normal kid would. He played sports, made new friends, and even met his high school sweetheart Christina at Worland High School.

After high school Christina and Manny decided it was time to get married and find a way to attain his citizenship permanently.

After getting married, he said that they waited awhile and Manny applied for legal alien status, and then applied for a full citizenship. This process can take a long while because of the required checks and forms to be looked over properly, but after some time, Manny received the news.

"After some time I finally got the call, I went and took the test, and said my oath to the flag and became a citizen," Davila said.

Noting that this test was not as simple, and he had to "know things that most Americans do not need to know," in regards to certain civic questions about the country.

Having the chance to become a citizen of the United States is a dream and a large goal for some people to get away from a more difficult life in their original country, and doing it is not easy.

"I would not say that it was hard (to attain citizenship), but it was not easy," Davila said. "It was a long, but pretty smooth process."

The citizenship process allowed him and his family, his wife and four children, to live in this country, and seek a way to get more freedom and a better life.

"That is what everyone is looking forward to when becoming an American, being able to have the same freedom and rights as everyone else," he said.

Two weeks ago, as the country celebrated its 243rd anniversary of independence, Manny got to experience that, at the end of a hard day at work, finally being able to celebrate as a United States citizen, along with his coworkers and family.