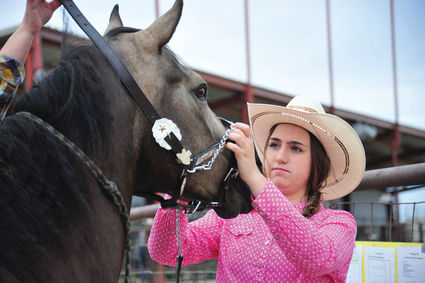 WORLAND - Junior showmen can have little or up to three years experience but each year continues to be a learning experience, never more so than with the horsemen at Saturday's Washakie County Fair Horse Show.

Beckett Tharp and Zane Lentsch have both been involved in 4-H for three years, competing in the junior division for the horse show and horse showmanship. Next year they will move into the intermediate category.

He said he has learned a lot in his third year working with his horse, specifically working on fine lead changes and knowing how to tell when the horse is on the right lead – the inside shoulder goes forward before the outside shoulder.

Zane Lentsch earned grand champion showman with his horse Dude. He enjoys showmanship because "it creates a bond." He said it has also helped teach his horse how to move his feet while Lentsch is on the ground. He said it is harder to teach the horse to move when the rider is on the ground than when the rider is on the saddle because movement is usually signaled up in the head and shoulders.

Over the past three years Lentsch said he has learned about making and keeping eye contact with the judge during showmanship, continuing to make the horse look good, teaching him to trot and standstill.

Lentsch has also competed in shooting sports - archery and shotgun, and has a sports fishing project.

Hailey Wall competed in her second year in horse showmanship with her horse Buck.

She said she has learned how to present herself with her horse and getting the horse to trot and cooperate with her to lead him through the pattern for the judge.

Belle Starbuck is also in her second year and enjoys working with her horse Timmy to prepare for showmanship.

Her brother Stetson, joined 4-H for the first time this year and thought it would be fun to try. He said he has learned a lot about his horse, including how to back out in trail riding, as well as side passing.

Aspen Hamilton also competed Saturday for the first time and said she enjoyed the showmanship competition.

Originally this summer she had intended on participating in a drill team but when there were not enough participants she started with her horse Buddy in 4-H to prepare for fair.

She said she has learned a lot about her horse while preparing for fair and during the showmanship competition, including the fact she needs to look at the judge more. She learned how to get her horse to lope and ride in the trail program.

Grand champion showmen will compete in Friday's round robin large animal competitions. The 4-H competition is at 1 p.m. and FFA is at 3 p.m. There is no round robin for small animals this year.