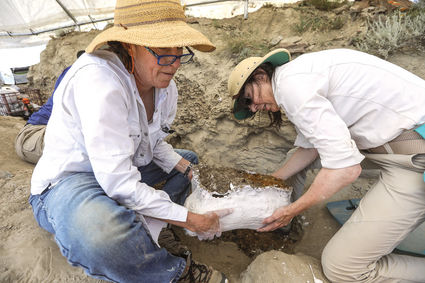 Sharon Bax of the Morrison Natural History Museum (at left) and Kathleen O'Brien Ellis of Reading, Pennsylvania pull out a small piece of a torosaur frill and a femur of an unidentified animal from the "Bert" quarry. The dig is taking place near an excavation to uncover what may be a full skeleton of a torosaur nicknamed "Carol."

GLENROCK - Christopher Rusin wedges a fine needle-point tool into hard-packed mud stone that hasn't budged in more than 60 million years. At his feet rests a pile of mangled bones from a dinosaur. It's Rusin's first dinosaur dig. He drove north from his hometown of Golden, Colorado, to check "dinosaur dig" off his bucket list.

It's his fifth consecutive day out in the Wyoming summer heat, but you couldn't tell by the permanent grin he's wearing. Even the blister on his palm – the size of a silver dollar handed down from a shovel a few days prior – can't keep him down.

A few feet to his right, Paleon Museum Director Sean Smith carefully applies a hardening substance to the exposed pile of bones slowly and methodically. He can't afford to make a mistake.

"(The) inside of some of these ends is literally almost like dust," he said of the bones still halfway encased in mud stone.

Although the two work quietly and carefully around the heap of dinosaur bones, Sean's excitement level is through the roof.

His exhilaration extends from one lingering question: what is this thing?

"We haven't found the piece to say, 'This is exactly what it is,'" he explains. "Triceratops is the most common animal out here. That's the one it doesn't look like. The other animal is torosaurus."

The torosaur is in same family as triceratops, akin to difference between a moose and elk but on a much grander scale.

Below Sean's boots rests the most complete animal he has ever found on the hillside just a stone's throw away from downtown Glenrock. A place, due to a longstanding agreement with gracious landowners, that he has romped around, looking up and down and all around for dinosaur fossils a good portion of his life.

It's where he found Stephanie, a triceratops that put Glenrock on the map for having dinosaur bones in the ground, which in turn spurred the Paleon Museum's inception about two decades ago.

Stephanie was a great find, but where Smith hovers now could be an even greater discovery. These bones could leapfrog Glenrock as a destination for dinosaur connoisseurs from around the globe. Will that be the case? Sean can't definitively say just yet, but he remains optimistic.

Torosaurus bones have been found along the ravine of the exposed Lance Formation in five spots, but all of these consisted of much smaller finds. This one is different.

"We know they're here, so it wouldn't be a totally unique situation for us but would certainly be one of the most complete torosaurus skeletons found anywhere," Sean explains.

"Really?" Rusin questions, immediately taking more care around the bones as he plucks away clumps of mud stone.

"It's only the third one ever found, postcranial," Sean's father Don Smith chimes in from across the quarry. " They've found several skulls, but nothing with postcranial."

Finding the third-ever torosaurus alone would be a huge accomplishment for Sean in his professional career.

That's not the only factor sweetening the pot.

"We have more bones than either one of the other two (torosaur finds)," Don adds with a grin.

The dinosaur was given the name Carol in 2015 after Stuart McCrary found the first bones and had the honor of naming the animal. He opted to name it after his wife. The bone he saw was sticking out from a hillside within 100 yards from the popular "Bert" quarry the team has been excavating for the better part of 10 years. Each year, heavy spring rains erode the soft sandstone earth, revealing more and more to investigate.

" This is the second really hard season on it," Sean says of the slow, painstaking work to unearth Carol. "It took us a couple of years to really get to it."

What they're finding in the location consist of mostly complete bones, Sean says as he points to one of the ribs.

"They're absolutely complete for the bones they are," he said. "The preservation on them is kind of tricky, as they are a little less preserved. We're not seeing the amount of mineralization we do in other (quarries)."

Potentially sitting atop a world-class dinosaur find, the fragile nature of the bones forces a delicate process when bringing the bones out of the earth.

Diving into such a rare find, they aren't particularly in a big rush, and rightfully so. In two summers, they've found 41 out of more than 200 bones, exposing roughly a quarter of the complete skeleton.

Sean would love to know if he has a complete torosaur just waiting to come out of the site, but he will have to test his patience, digging during the narrow window of summer. By October, working at the site becomes tricky at best, and they have to pack up for winter.

"If it turns out to be torosaurus, some of these bones have not been discovered," Sean points out of the site's significance. Finding a complete skeleton can aid other finds, as there will be a bone to which to compare others.

"One of the big problems right now is, there is not a lot of known differences between the bodies of triceratops and torosaurus," Sean explains in the hot sun. "If we can definitively pin this one to it with as complete as these bones are, then we may be able to help define the difference of the bones themselves."

Finding the complete skeleton could mean big financial gain for the museum, as they can sell casts from their find to the two other torosaurs in museums elsewhere to make their skeletal displays complete.

Normally, sites featuring dinosaur bones consist of a wide range of animals. Pre-historic flowing water can move bones around and typically deposit them in areas such as a point bar in the river system.

Carol's situation is slightly different. She was found in a long-standing pond with no water flow, meaning the pile of bones they are uncovering all come from one particular creature.

"These bones have actually dropped right where they did 68 million years ago and its all one individual," Sean excitedly proclaims. "That's information we're getting from the rock. It's a very unique system."

"That's going to be the big key. If we can find that kind of stuff, we know we have a really good, complete animal."

This could be what defines the description of what a torosaur is, which would be spectacular," Sean says. "That goes on the worldwide books as, 'It's here in Glenrock.' That brings in students, doctorates, other paleontologists. That would be a big key for us."

As per the agreement between the museum and the landowner allowing them to dig, Carol would remain in Glenrock for the purpose of education.

Sean hopes to remove all of the bones that have been exposed at the site this year and get them back to the museum. He says working at a site like Carol's can be a 10-year process from excavation to being on display, so they have a long road ahead of them.

Sean and his father are itching to learn more about what they've been sitting on for the better part of four years but remain vigilant and stick to their standards to take it one bone at a time. Don, who helps his son out each summer, couldn't really ask for a more exciting venture to keep him busy in retirement.

"I'm looking forward to getting most of these exposed bones right now," Don adds with excitement as he gazes over the progress made. "That's my view."

There's still a lot of summer sunshine left this season and more groups of diggers scheduled in the coming weeks. With that, Sean feels confident for what they can accomplish in the remaining weeks before snow f lies. Once they have the exposed bones in the museum for further analysis and preservation, the site will be covered back up.

Then, it's months of waiting for winter to disappear and the next season of digging to begin.