Warriors considered among the top contenders in 3A golf 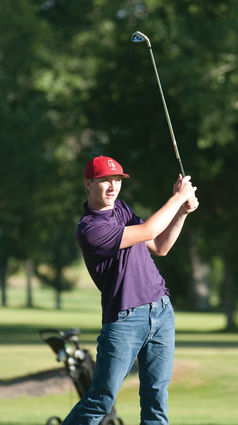 Warrior golfer Logan Foote tees off during a morning practice on Aug. 13 at Green Hill Golf Course in Worland.

"We want to win. We're to the point where we're moving past trying to be competitive and moving on to trying to win. Lander will be there and we'd like to send a message early on to them," said WHS golf coach Chad Rose, when talking about expectations for the Warriors in their first week of competition.

Much as it was last season, the race for the 3A State title will be between Lander, 3A's two-time defending champions, and Worland. The Warriors finished runners-up last year, coming in 10 strokes behind the Tigers.

While it is expected that Worland and Lander will be duking it out for the title again, Star Valley could be a dark horse contender. The Braves finished third at state last season and host this year's state tournament in Afton Sept. 20-21.

State and conference titles are the goals for the Warriors this season and on the Lady Warriors side of things, provided they can find another golfer to register a team score, shooting 310 is the goal for 2019.

"Contender, we should win," said Rose when asked about his expectations for the Warriors. "We're going to play to try put together a team that can give us the best chance to win. I think we have the team to do that and I'm excited to compete against the Lander team. Not to make it a two-horse race because Star Valley finished third last year and state is at their place this year. I've seen home teams sneak by the favorites and win state and it can happen this year too.

"If we get a girls team rocking, I think trying to shoot a 310 will be a goal at some point in the season. On the boys side, we want to defend our title as conference champs and for the girls would like to see them get All-Conference."

The Lady Warriors are led by junior Robyn Horath, who after a strong finish in 2018 and an excellent spring golf season, figures to be pushing for an All-State contention this season. Horath was even named one of the Casper Star Tribune's 3A girls golfers to watch in 2019.

"On the girls side, Robyn is back. She had a super spring and medaled in every tournament. The Casper Star picked her as one of the top 3 returners in 3A. She keeps getting better all the time. She hasn't made All-State yet but I think she can gun for a top 5 finish," he said.

While Rose disagreed with the Tribune's comment that Horath had a bad state tournament, he does agree that her strong spring season should lead to big things for the junior.

"I was quick to remind Robin that they made a statement that was not exactly true. The comment mentioned about how she had an unfortunate fold at state last year. Well, she shot the same scores at conference and state in consecutive weeks. He was right that she did have an exceptional spring.

"Ultimately, you have to go out there and swing because it's not like they're going to list all your top 10s before you swing. You just have to take it one swing at a time and we struggle with that with all the kids, from the best ones to our newest competitors," said Rose.

Sophomore Karsten Simmons will be the Warriors No. 1 golfer and is looking to defend his 3A State title. He was also on the Tribune's 3A golfers to watch list. Behind Simmons are a mix of experience and youth with seniors Logan Foote, Konnor Macy and Karter Dunham, juniors JT Klinghagen and Mack Page, and freshmen Landen Gilmore and Jackson Dunham. Foote and Klinghagen are returning All-State golfers with Foote earning the honors in 2018 and 2017.

"I have three seniors back who have been here for a while. Our No. 1 player is a sophomore and our No. 2 is a junior (Klinghagen). We're pretty young but we're also pretty experienced. We have a two-time All-State golfer in Logan Foote, he's probably the most competitive kid I've ever coached," said Rose.

"Konnor Macy has played well and we bring in some freshmen who had a lot of rounds in the 70s over the summer. Landen Gilmore and Jackson Dunham had really successful summers. I'm really interested to see how it pans out. We've had kids who have lived out here; Gavin McEndree was out here every single day."

The depth on this year's Warrior team is going to be among the team's strengths. Rose expects his No. 4 and No. 5 golfers to change a few times this season. The stiff internal competition should only make the Warriors better as the season progresses.

"Lander also brings back everybody. They're pretty strong through four but I feel strongly about our chances through five. We only take four in high school golf but if things happen and we need to use our five, we have a strong advantage over them. We have 12 golfers vying for eight spots and I loved that we have that many competing for spots. The four and five spots are going to be battled for all season," said Rose.

Another strength of the Warriors is their long game and looking ahead to the state tournament, the course in Afton should favor the Warriors long game.

"The state course is short with modern greens and we're long and I think we can dominate it. It's designed for high school kids and not designed to beat them up, it's not punishing to leave the fairway," said Rose.

Results from Powell and Cody will be in next week's edition of the Northern Wyoming News.