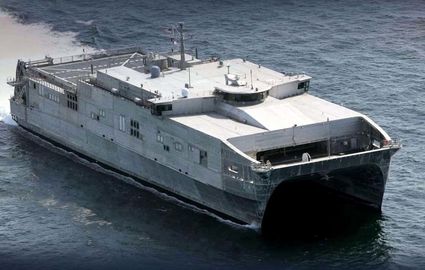 The U.S. Navy has named its newest expeditionary fast transport ship the USNS Cody in honor of the Wyoming city. Cody joins several other communities including Cheyenne, Casper and Laramie as Wyoming cities chosen as U.S. Navy ship namesakes.

"The secretary of the Navy got a hold of me ... to inform me he had commissioned and is building the USNS Cody, named after the town of Cody," Hall said.

Cody joins Casper, Cheyenne, Laramie and a few other communities as Wyoming cities chosen as U.S. Navy ship namesakes. The Cody, with classification T-EPF-14, is expected to be commissioned within the year.

"It is an honor and brings a sense of pride to our town," Hall said.

The future USNS Cody is the first ship named in recognition of the city named for William F. "Buffalo Bill" Cody.

"The people of Cody are staunch supporters of a strong Navy and Marine Corps team, and it is fitting to name a ship in honor of this great city," said Spencer in a written announcement. "I am pleased the spirit of Cody will live on in the future USNS Cody."

Expeditionary fast transports, formerly designated the joint high speed vessel, transport personnel, equipment and supplies. They can carry 600 short tons of military cargo with a crew of 26 civilian mariners. CIVMARs are federal government employees who pursue a civil service career aboard U.S. ships that support the Navy's warfighters and warfighting platforms around the world.

The USNS Cody will be equipped with airline-style seating for 312 embarked troops along with a fixed-wing berthing outfitted for an additional 104 personnel.

With a shallow draft less than 15 feet, a flight deck for helicopter operations and an off-load ramp that allows vehicles to quickly drive off the ship, the high-speed, all-aluminum EPF is a flexible asset used to support a wide range of operations – from port access to operations close to the shore.

Bridging the gap between low-speed sealift and high-speed airlift, EPFs are used in support of the Global War on Terrorism Theater Security Cooperation Program, Intra-theater Operational-Littoral Maneuver and Sustainment and Seabasing. EPFs are also used in response to a wide range civilian contingencies such as noncombatant evacuations, humanitarian assistance and disaster relief.

Austal USA is under contract to build the new ship. Located in Mobile, Ala., the American branch of an Australian company designs and manufactures defense and commercial ships.

Jim and Sandy Pedersen are pleased to learn the U.S. Navy has chosen to name its newest expeditionary fast transport ship after the city of Cody. The local Navy veterans shared their reactions by email.

Sandy Pedersen described the choice as a good fit.

"The citizens of Cody have always been supportive of our military, especially the Navy and Marines," she said.

"It is always an honor for the U.S. Navy to name one of their ships after one of our towns, counties or states," added Jim Pederson.

As Cheyenne does each year, he envisions some of the ship's crew participating in Cody's annual Fourth of July celebration.