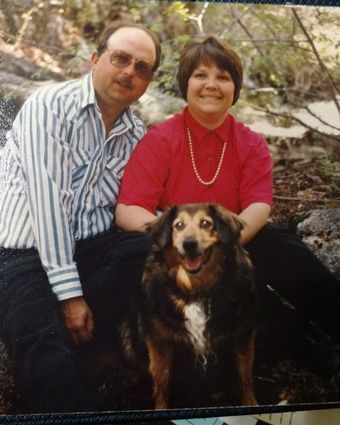 I can only say that before getting married I got some advice from my sister and a dear elderly woman in our church.

My sister said to make sure that we were on the same page with the little things, brands of toothpaste (that's changed as our dental needs have changed), ketchup (thankfully both Heinz people), paper roll under or over (over for me, he doesn't care).

It may seem strange but we had fun going through different products that we buy. They have changed over the years and we realize a lot of our favorite brands were carried over from our parents so we've tried different brands and come up with our own favorites.

The advice from Celia (God bless her soul) was that marriage was not a 50-50 partnership. She told me if both sides give 50 percent then when one of us is having a bad or down day and can't give the full 50 as a couple we are never at 100 percent.

She said you have to strive to give 100 percent every day.

I have tried to do that over the past 20 years.

There is also advice I haven't taken that I think has helped me throughout our marriage.

Prior to our wedding someone said, "So, you're going to give marriage a try." Well, no, I can give steamed broccoli a try (and I did and likely never again) but I entered into the marriage 20 years ago with the intent of making it last. I realize for some that doesn't always work out, but I doubt that most people go into a marriage with the thought of just "giving it a try."

Then later in my marriage I was talking to a friend about something and I joked I wondered what Alan would say when he found out and she said, "just don't tell him." I replied, "I can't do that. I don't keep things from him." And I don't, not even when I forget to write down checks or deposits in the checkbook, that's what bank statements are for and by the grace of God I have never had us overdrawn; or when I wreck the ATV, once, twice, OK three times but none were bad and no one was hurt. Of course, maybe that's why he doesn't ask me to work with him anymore.

I love Alan. Alan is my encourager, my support, my sounding board, he keeps me grounded, he helps me see things from different perspectives, especially when I get tunnel vision, he helps me think outside the box in work and life, and he makes me laugh and smile on an almost daily basis.

And, of course, I truly believe one of the biggest reasons we can celebrate 20 years of marriage is dogs.

Dogs have been a part of our life since we met. I had a dog named Jake when we met. He was the best.

My mom asked what I would do if Jake didn't like the new boyfriend. I said, there would be other guys but I wasn't giving up the dog. The dog I knew would be there for me. Alan I had just met.

But it took a few dates and then Jake and Alan became best buds. Alan taught him how to fish and let him ride in his pickup. I tried to figure out how to get Jake in the wedding but every idea got turned down, by everyone. He did make it into some engagement photos though.

When we got married we added Luke, a border collie/German shepherd puppy. We faked everyone out and told them we were adding to our family. Everyone laughed, except my mother, realizing she was getting another granddog.

Yes, we had three for a few years, but we are down to two again and they give us great joy every day.

So, in celebration of 20 years last week we returned to our honeymoon spot, the Black Hills. On the original honeymoon we left the dog with a sitter for the week. This time the dogs ventured with us and celebrated with us. (More on our trip in later columns.)

So is our formula fool-proof, guaranteed? Probably not, I just know it works for us, and for that I'm thankful and blessed.