Lady Pioneers looking to bounce back with three-match homestand 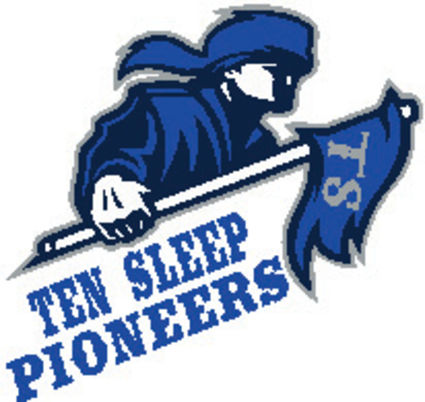 TEN SLEEP - The Meeteetse volleyball Invitational did not go as planned for the Ten Sleep Lady Pioneers. But while they did not pick up as many wins as they would have liked TSHS volleyball coach Desiree Egger believes the lessons learned should benefit the team in the long run.

"It was a learning experience. We were fighting our serving and down ball all tournament. I like how we played better on Saturday but we just didn't play well on Friday. Our transitioning wasn't great, we weren't playing the ball well or reading the hitters well.

"They're a talented group. It's just a matter of them believing in the system and the 6-3 that we're running because it's best for our hitting and coverage options. It's a learning curve with a new system we haven't done before," said Egger.

Good thing for the Lady Pioneers is that their next three matches are all at home. Saturday, Sept. 21 they host the Burlington Huskies followed by a Sept. 26 match against St. Stephens and finishing it off with a Sept. 28 match again Arvada/Clearmont.

"Being on your floor you just have that familiarity with it and the crowd is a huge thing too. Volleyball is such a back and forth game with the momentum and a home crowd can help a ton," said Egger.

Much of this week's practice will be focused on being more comfortable within the 6-3 system. Egger believes her team has solid chemistry and they trust one another out on the court. It's just taking some time gaining that familiarity with the new system. And the best way to go about that is getting as many reps as possible.

"We do have good chemistry. They've shown it in games against St. Stephens and Lovell. They trust each other, I just think we just need to keep gaining experience in this system. We had some great sets and hits over the weekend, we just need to learn this system and be students of the game.

"It hurts us in the end that we don't have another six to play against. Everything looks fine when you're walking through it but how do you live-action that so you can get familiar with where you need to be during a game. You can work logistics all day but until you can actually see what it looks like with a live ball, it's different," said Egger.

As one of the smaller schools in 1A, Ten Sleep has to deal with some unique situations and one of those situations is playing out this season. The Lady Pioneers won't be playing at the 1A West regional tournament because several of their players will be at National FFA and with only six total players out, they just don't have enough to compete.

"We're not going to regionals because National FFA falls on that same week of regionals and we've had a lot of talks about finding the motivation for this season. Like personal reasons of trying to make All-Conference or All-State or maybe even trying to get win our division or placing in the top two," said Egger. "I think that's going to play into the season and we'll have our lulls but we'll get out of it."