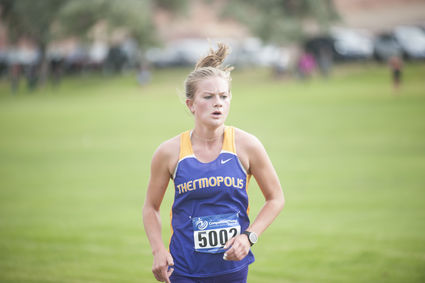 Lady Bobcat McKenna Bomengen keeps pace ahead of the field during the Bobcat Invitational in Thermopolis on Sept. 21.

THERMOPOLIS - The Hot Springs County High School cross-country team held their own on their home course last week as they hosted the Bobcat Invitational at the Legion Town and Country Golf Course in Thermopolis on Sept. 21.

Lady Bobcat senior McKenna Bomengen finished first with a time of 20:46.46 and fellow senior teammate Tahja Hunt crossed the finish line at 22:20.38 for a fourth-place finish. Overall HSCHS cross-country coach Stephanie Metz was thrilled with her team's performance as they showed no signs of wear on their tough home course.

"It was an awesome meet. We had a good discussion about it ahead of time and being our course and that we own it. We don't let anyone else run our course better than us. I was super excited how they stepped up for it and stood up to that hill," said Metz.

Added Metz about Bomengen and Hunt, "She's looking great and she's getting out and running and it's not hurting. We're getting there and making a lot of positive strides. Tahja too, fourth isn't where she wanted to place but at various parts in her race, she was looking great. She's showing her endurance and looking really good. I've got high expectations for her at state."

While Hunt did not hit her goal of battling teammate Bomengen for first, Metz still loved what she saw from one of her senior leaders. Finishing fourth is only going to add to Hunt's determination to cap off her Lady 'Cat cross-country career on a high note.

"She raced well and looked good. She wanted to race McKenna and see who could win their final home race. But this just fuels the fire for the next week and by no means am I disappointed with her race, she did phenomenally well," said Metz.

As for the remainder of the Lady 'Cats team, Hailie Martinez, Aspen Jensen, Rebekah Johnson and Dayna Crow all showed strong improvement as well.

"My next group are right there, neck and neck. Every race it's someone new on who's going to be our three through six runners. Hallie came in third and I was really excited to see her do so well. The same thing for Aspen Jensen, I'm excited to see how well both are going to do," said Metz.

For the 'Cats, the team made up of four underclassmen continues to improve by leaps and bounds. After each week Metz is having to readjust expectations for this group because they keep blowing by them.

"The boys team continues to floor me," said Metz. "They're all looking so good and they've got me on my toes, as far as looking at our state placing and where we could be. Cord Simeral did an awesome job closing the gap between him and Corbin [Simeral], our No. 1 runner. Cord is pushing himself and getting closer and closer to his brother. Karsten [Hart] is our No. 3 runner and he's our sophomore, he was so gassed and just pushed his way up that hill and then flew down it at the end.

"Isaac [Robinson], Cord, Corbin and Karsten are all doing so well. They're improving and working through their pain and they're everything a coach could ask for."

Hart was the lone Bobcat runner last year and the sophomore has made so much improvement that he looks like a completely different runner. The progress he's made is so great that Metz doesn't even bring up his course times from last season because he'll shatter those times with new personal records.

"I have all their splits and PRs from last year, and him being the only one who has run these courses, I just look him in the eye say 'We're not even talking about last season. You don't get to know your time and we're not thinking about that.' And he agrees and he gets up and races," said Metz.

The 'Cat and Lady 'Cat runners are in Worland today for the Warrior invitational. And with the course being a flat, fast course, Metz wants her runners to enjoy the race and have fun as they push for their fastest times.

"I told them that this course is to get out there and have fun and enjoy it. The course is flat so they can get out there and race it and give us a good time to see where you're at. Also to enjoy it because they don't have many more like this. It's getting them more amped up and they're excited about it," said Metz.