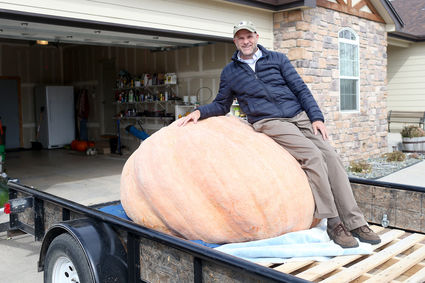 Andy Corbin poses for a photo with his 1,491 pound pumpkin in Cheyenne. Corbin's pumpkin has been recognized as being Wyoming's largest ever grown in Wyoming.

CHEYENNE – The pumpkins Andy Corbin grows at his home in east Cheyenne are so big and so heavy that he needs a handmade tripod to move them.

Weighing in at 1,491 pounds, his biggest pumpkin of the year broke Wyoming's state record.

For more than a decade, Corbin has grown giant pumpkins in his garden to show at competitions.

"It's kind of the zone where I can get away from everything," Corbin said. "My stress kind of just disappears when I go out in the garden."

While it might be relaxing for Corbin, growing a record-breaking pumpkin is no small task.

He prepares the soil with leaves and fertilizer during the fall, so when spring comes, the garden is ready to go. During growing season, he checks the moisture in the soil daily and swaddles the pumpkins in blankets to keep them warm at night.

On average, his pumpkins grow about 25 pounds each day during the season. These aren't grown with your regular pumpkin seeds, though – one seed for a giant pumpkin can cost $600.

With such success, one might think Corbin keeps trade secrets for growing the biggest pumpkins. But in reality, Corbin has developed an entire website for pumpkin growers, complete with tips, tricks and his favorite seeds.

"The growing community as a whole is really nice," Corbin said. "Everyone's willing to share information. I can't really say there's secrets out there."

On Corbin's website, pumpkinfanatic.com, users can find information on growing pumpkins both big and small. The website also has a tool for tracking the genetics of a pumpkin. Growers all over the world can search for a pumpkin by its weight or who grew it to find the exact family tree.

After learning tips and tricks from other growers in the competitive field, Corbin now shares his knowledge of pumpkins.

"That's the only way you get to the next level is listening to other people and what they've done," he said.

Growing pumpkins in Cheyenne does take some getting used to because of the climate. Corbin has hail nets to protect the pumpkins from storms and uses blankets to keep the pumpkins warm at night. He had to pull his record-breaking pumpkin early this year to beat the cold.

"You have to learn how to grow for your region," he said.

As a kid growing up in Cody, Corbin was no stranger to pumpkins. He grew up in the garden with his dad. His love for planting was rekindled more than 10 years ago, thanks to a friend who also grows pumpkins in town.

In sixth grade, foreshadowing the future, Corbin won a pumpkin carving contest at school. When Corbin and his wife had children of their own, they passed down his childhood hobby.

Looking forward to next year, Corbin said he hopes to join the 4,000-pound club and grow three pumpkins that weigh more than 4,000 pounds combined.