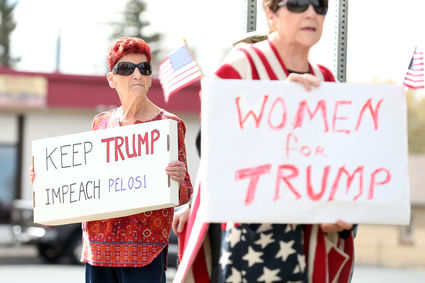 Maureen Hurley, left, and Demi Cross hold homemade signs during the anti-impeachment rally in support of President Donald Trump on Thursday, Oct. 17, 2019, at the corner of Central and Eighth avenues in Cheyenne. The rally was held in conjunction with other anti-impeachment rallies across the country.

Dozens of supporters of President Donald Trump took to the streets in Jackson, Cheyenne and Gillette on Thursday to protest impeachment proceedings in the U.S. House of Representatives.

The rallies were part of national activities organized by a group called "Women for America First" that featured marches in Washington, D.C., and other major cities around the country.

The hats - some reading "Make America Great Again," others "Make Jackson Great Again" - sat atop the heads of area conservatives, dozens of whom gathered Thursday in solidarity with the national "March for Trump."

As Democrats pursue an impeachment inquiry into President Trump, his allies around the country are staging shows of support. It was an improbable sight at the center of Jackson, one of the only liberal outcrops in the sea of conservatism that is Wyoming. But those who attended argued it reflects a swelling energy among the area's Republican base.

"We are here," said Dan Brophy, "and we need to start getting together."

The crowd filled the southwest corner of the square for more than an hour, waving American flags and pro-Trump signs. Passing cars honked their approval, and from some rolled-down windows came clapping and shouts of "Go Trump!"

Alex Muromcew, chairman of the Teton County GOP, said the turnout didn't surprise him, adding that he hopes the party can maintain this intensity ahead of the 2020 election.

"This gets me fired up to see such an enthusiastic response on such short notice," he said. "I think it bodes well for the Republican Party."

Muromcew read a statement from Wyoming's U.S. Rep. Liz Cheney in which she lambasted Democrats over what she called a "hyper-partisan, non-transparent, secret inquiry into the president."

"I stand with you in strong opposition to this effort," she wrote, "and share your frustration with the process being exercised by House Democrats."

"When I came today, I had four people I knew of," she said, turning to count heads. "Now we have ... who knows how many."

A group of about 20 people met Thursday afternoon at the corner of Central and Eighth avenues to show support for President Donald Trump, who faces an impeachment inquiry in the U.S. House of Representatives.

Lisa Glauner, who organized the Cheyenne event, said she was prompted to do something locally after seeing the initiative Wednesday on Facebook.

"Everything that Trump is being accused of, the left has actually done," Glauner said. "Their whole reason for impeaching is to make sure that their corruption isn't exposed."

"I think a lot of us are just sick and tired of how the press has come so violently against Trump," Glauner said. "The only way he has a voice is to tweet. At first, I hated it, too, but then I realized that's the only way he can talk."

During the demonstration, many flashed signs to passing cars that honked back in support. Demi Cross, waving a "Women for Trump" sign, said she was one of the first Trump supporters in Laramie County.

"We didn't have anybody. The (Ted) Cruz campaign was very organized at the beginning, so everybody was with them," said Cross, who is a member of Cheyenne's Capitol City Republican Women group.

"But no, I like Donald Trump. I like the idea he's a businessman ... and I don't care what he says in his tweets. It doesn't bother me at all, because we've got worse things going on than we know about."

Jack Riley, a Cheyenne resident who came to the rally with his wife, said he isn't worried about impeachment inquiries.

"They're not going to happen," Riley said. "That's just a political ploy from the Democratic side of the House, the way I feel about it."

"It's going to increase Trump support," Riley said. "Wyoming was one of the largest groups that voted for Trump last time, and I think it will be even greater this next time."

GILLETTE - About 20 march in support of Trump

"I don't know what I've been told, but Donald Trump is made of gold!" Mickey Maas shouted to a group of about 20 President Trump supporters in the Harbor Freight parking lot in Gillette Thursday morning.

Maas, along with Audra Ritthaler, organized the Gillette Trump march and prepared chants and phrases for supporters to shout as well as created signs and flags for those who marched.

The group included young children with their parents and teenagers. It marched from the Harbor Freight parking lot to Walgreens and then south down Highway 59.

Maas said she will be organizing another march soon that will be on a weekend so more supporters can make it.