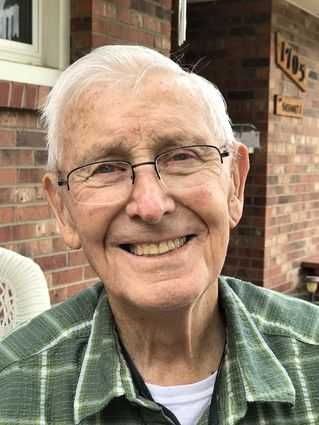 Donald Dean Neihart, 89-year-old Worland resident, returned to his loving Lavern on October 12, 2019, on what would have been their 67th wedding anniversary.

Donald was born on September 16, 1930 in Crete, Nebraska to Ralph Louis and Alice (Kraus) Neihart. He attended school in Crete, graduating from Crete High School in 1948. While in high school he participated in all sports. After graduation, Don served his country in the United States Navy from 1948 to 1952. He served during the Korean Conflict with Naval Beach Group One Boat Unit in Japan and Korea and participated in all three invasions of Korea.

Donald married Lavern Ann Pomajzl at Grace Methodist Church in Crete on October 12, 1952. They had three children, David Dean, Debra Ann and Douglas Jay. He graduated from Chadron State College in Chadron with a Bachelor of Science in Education Degree in 1956. He taught mathematics and coached all sports at Gering Junior High School in Gering, NE. He received a Master of Education in Education Administration Degree from the University of Wyoming in 1966. The family moved to Worland in August of the same year where Don was the Principal at East Side Elementary School from 1966 to 1976 and at South Side Elementary School from 1966 to 1992. He served eight years on the Washakie County School District #1 School Board.

Don was a member of the United Methodist Church, serving on several committees in leadership positions. He coached Little League and Babe Ruth baseball and worked with the Boy Scouts of America. He was a life member of the American Legion and Veterans of Foreign Wars.

Don was devoted to his loving wife, Lavern for 62 years and to his children. He loved the great outdoors, to hunt, fish and camp with his family. Reading, traveling, woodworking and working in his garden were other beloved hobbies. He was always ready to help others.

He was preceded in death by his parents and his wife, Lavern.

Funeral services will be 10:00 a.m., Friday, October 18, 2019 at the United Methodist Church in Worland with Pastor Kayilu Pfoze officiating. Burial will follow at Riverview Memorial Gardens Cemetery with Military Honors provided by the US Navy and American Legion Post #44. Visitation for family and friends will be held one hour prior to services at the church. Memorial donations may be made to the United Methodist Church and sent to PO Box 524 or made to the donor's choice. Online condolences may be made at http://www.bryantfuneralhomeonline.com.