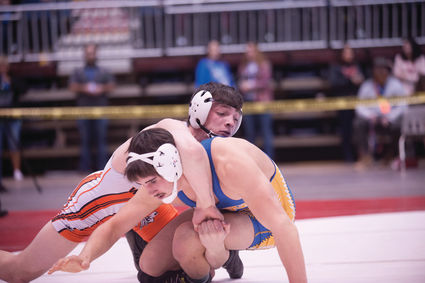 WORLAND — The 2020 Wyoming High School wrestling season has concluded and for the Worland Warriors, they can add yet another event-filled season to the books.

At the season’s final competition, the 3A State tournament, the Warriors finished third as a team scoring 168.5 points, had 160-pound junior Luke Goncalves successfully defend his state title, two All-State wrestlers (Goncalves and Anthony Martinez) and a total of eight placers.

While most championship matches were going all three periods, Goncalves wasted little time in securing his second-straight 160-pound state title. The junior pinned Wheatland’s Seth DeWitt 57 seconds into the match.

Goncalves and DeWitt have matched up several times this season with Goncalves coming out on top every time except once. At the Lander Invitational on Jan. 24-25 DeWitt got the better of Goncalves. Since that loss, Goncalves made it a point to be the aggressor and dictate the flow of the match. And that included beating DeWitt twice, once at the Ron Thon on Jan. 31-Feb.1 and at the 3A East regional meet in Buffalo on Feb. 21-22.

“My mindset was to go out there to score as many points at the beginning,” said Goncalves. “It didn’t matter how he beat me, it was all about having the mindset to wrestle as hard as you can.”

Knowing that they’d likely see DeWitt again at state, Goncalves and WHS wrestling coach Josh Garcia talked about switching things up to catch him off guard.

“Luke and I spend a lot of time together and work together quite a bit. Every time Luke stepped on the mat, he did so with the mindset of not letting the other kid hang around. That’s exactly what he did in regionals and in the state tournament. After you wrestle the same kid a few times they get better and learn what you’re looking for.

“Luke and I talked a little bit and we changed up his stance some and his lead leg. Just a couple of things like that, and he went out there and took him down with an outside fireman and then Luke went for the pin. He stuck to the game plan and didn’t look back. It’s super exciting for Luke and he should be proud of himself.

Garcia added what it means to have a wrestler like Goncalves in your wrestling room, “Being able to coach a guy like Luke is special and having him as a leader on our team is super special. The kids look up to him and feed off of him. He’s a great kid to have in our room and I couldn’t ask for anything more.”

Repeating as 3A’s 160-pound champ was a challenge for Goncalves. All season long he battled guys wanting to take down a state champion but the junior kept the philosophy of outworking everyone.

“It’s nice, it’s been stressful but it’s nice,” said Goncalves on winning back-to-back titles. “It’s tough having a lot of kids out there looking for ways to beat you but you just have to train hard and keep wrestling hard.”

Worland’s 106-pound junior Anthony Martinez was the other Warrior to make it to the finals. Going against Powell’s Colt Nicholson, Martinez started the match strong, with a takedown and going up 2-0. But in the second period, Nicholson swung things in his favor and eventually pinned Martinez in the second.

“Those Powell kids are pretty dangerous and after the first period when Anthony took him and was putting good pressure on him, the coin flip was deferred to us he told me he thought he could get off bottom. In those situations, with wrestlers in the finals, you’re better off going with the kids best judgment. If you put them in a position that they don’t feel comfortable in, they’re probably not going to wrestle very comfortably.

“Unfortunately, the Powell kid got him, but to Anthony’s credit he’s wrestled well all year long and I don’t even discredit him in that finals match. He gave it his all and as a coach that’s what you want to see from your guys,” said Garcia. “To get two guys in the finals is super exciting and it’s the icing on the cake. I’m super proud of Anthony for making the finals.

The Warriors only had two wrestlers in the finals but where their wrestlers helped out the team the most was in the consolation rounds. Having 113-pound Domanic Hartley (third), 120-pound Daniel Weyrich (fourth), 120-pound Kyle Anderson (sixth), 126-pound Ross Goncalves (fifth), 170-pound Luke McBee (third) and 220-pound Brody Hernandez (fourth) score points in those rounds, or prevent other teams from scoring points, is what locked up third place for Worland.

“That’s our philosophy in our room. I don’t have to say anymore to the kids because they know the writing is on the wall. Everyone matters in our program and it doesn’t matter if you’re a first-year guy or a returning state champion. Everyone matters at the state tournament. After the first round, we had eight pins and we were in first place going into the quarterfinals.

Continued Garcia, “Anytime your kids battle like that, they are the kids that have bought into your system and they’re the kids that helped bring home the third-place trophy. Those guys coming on the backside were so important for the team.”

Garcia credited his senior leaders for helping instill that never-give-up mindset this season. “I’m going to miss our seniors. They gave us all that they had and it was awesome to see them wrestle back and show that pride. It shows what they’re about and what this program is about. I’m super excited for those seniors as well,” said Garcia.

The Warriors lose seniors Hartley, Hernandez, Weyrich, Pudge Hofmann and Nathan Mitchell to graduation this year but the rest of the wrestling roster will return for the 2021 season.

Bringing back most of this year’s team along with the addition of next year’s freshman class has Garcia excited for next season.

“I’m a huge numbers guy and that’s one of the main reasons why we took third. When you take 22 guys to state, those are big numbers. They make your room more competitive and make us more competitive in the future. We have quite a few juniors coming back along with our sophomore and freshman groups. You can never relax, so to speak,” said Garcia. “We’ve got work to do and camps and technique to start focusing on.”

Taking advantage of the offseason will be important for the Warriors. Next season the Green River Wolves come down to 3A, strengthening an already tough class. The Wolves are a top-notch wrestling program and may or may not be this year’s 4A State champions, as they await a ruling from the Wyoming High School Activities Association.

Green River could breakup Star Valley’s current reign in 3A, Star Valley won their fifth-straight state championship last Saturday. While some might be nervous about Green River joining the 3A mix, Garcia isn’t among that camp. He welcomes the challenge and is looking forward to a very competitive 3A field in 2021.

“I want to step up to the challenge. I know there a lot of folks that are worried about Green River coming down, I’m one of those guys that if you ask me if I want to stepdown to 2A or stay in 3A I’m all about staying in 3A.

“I want to be where the best competition for our kids. With Green River coming down that’s how I’m going to approach it. I’ve got to do more recruiting. It’s going to be a huge challenge but it’s going to be fun,” said Garcia.

HIGHLIGHTS OF THE SEASON

Looking back on the 2020 season, there are many highlights for Garcia to choose from. But among his favorites are watching the progression of his fresh-faced wrestlers, the leadership of his seniors and only losing two of their scheduled duals.

All of those factors made for a memorable Warrior wrestling season.

“I had a lot of good moments from this season. One of my favorite things from this season was watching our younger kids grow. You always want to focus on your seniors but it’s also important to build up those younger guys too. It was fun to watch guys like Kobe Swain, Creedon Newell, Ross Goncalves and guys like that, seeing them wrestle JV to start the season but eventually they’re giving varsity guys a run for their money.

“Seeing our seniors battle every single weekend was great. We had some great duals this season and we only lost two duals for the duals on our schedule, and those two losses were to Powell and Sheridan. Once again I have to take my hat off to our kids. When you only have four seniors in your lineups and you only lose two lineups it showed that our young guys stepped up and battled,” said Garcia.

Warrior placers from the 3A State tournament are as follows.