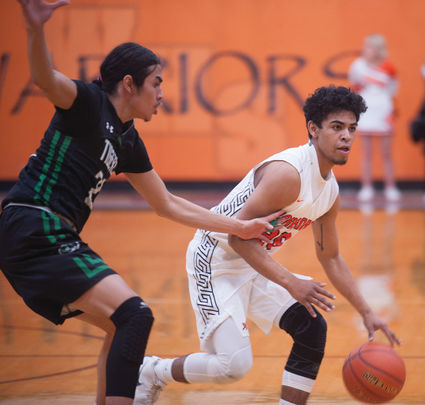 Warrior Devon Mercado looks for an open teammate during a Feb. 28 game against Lander at WHS.

This is the first regional championship for Worland since the current WHSAA (Wyoming High School Activities Association) classification system was put in place during the 1984 season.

The Warriors beat Lyman 90-58, in the quarterfinals, beat Lovell 66-44, in the semifinals and took down the Lander Tigers 81-73 in the championship game.

"I thought our guys prepared very well," said WHS boys basketball coach Aaron Abel. "Going into Lyman, we did a lot of things defensively that we haven't done all season. We switched a lot of screens and that was our mindset. Lyman runs an offense that is really hard to guard and we started switching some of their curl cuts, down screens, ball screens and dribble handoffs. That worked out pretty well on our end, it caused some confusion on their end and created some fast break opportunities for us and get the tempo in our favor."

Forward Mack Page led the Warriors in scoring and assists vs. Lyman with 25 points and seven assists to go with seven rebounds. Rudy Sanford was second in scoring with 22 points and Brock Douzenis scored 15 coming off the bench.

In the semifinals, the Warriors ran into 3A Northwest rival Lovell and got by them for the third time this season to advance to the regional championship. Sanford led the team in scoring with 21 points going 5 for 11 from 3 and bringing down seven rebounds. Jorey Anderson was second in scoring for Worland with 11 points, 5 for 10 from the field.

In the regional championship, Worland ran into Lander for the third time this season. A week earlier, the Tigers, handed the Warriors their first and only loss of the season. Wanting to control things from the tip, part of the Warriors game plan was to jump out to a fast lead.

Led by senior Luke Mortimer, the Warriors accomplished that part of their game plan as they led by 11 at the end of the first quarter. They nearly pushed their lead to 20 a few times during the first half.

Lander did make a run in the second half even cutting the lead to five early in the fourth. But Worland remained composed, stuck to their game and expanded the lead to double digits before ultimately winning by eight.

"We were able to get the jump on them and that was the main point of emphasis for us. In our two games against Lander, we hadn't started well in either of them. So we wanted to start fast and force them to be the team playing from behind for once. Taking that 11-point lead at the end of the first quarter was huge for us. We didn't sit on that lead and kept attacking in the second," said Abel. "Lander did a great job of extending their full-court man-to-man and made it hard for us to move the ball. We'll have to be better against that if we see that team down the road."

Also playing big roles in the championship game were Regan Schmeltzer and Wyatt Wyman. Schmeltzer did play a lot of minutes but they were impactful minutes, as he came up with big rebounds, steals and assists.

For Wyman, he made the Tiger defense pay for giving him open looks as he scored 10 points.

"[Regan] just played. Part of it was Lander playing a style that whoever was on the court next to Luke, Mack and Rudy, that's where they were focusing their defense. The other two guys had opportunities and I thought Wyatt Wyman and Regan Schmeltzer made the most of them. Wyatt scored 10 points and he hadn't done that in a while. Lander was giving him wide-open shots and he knocked a couple down and was able to get to the rim for a couple of layups as well.

"Regan came in when Mack got into foul trouble and he made three key plays that helped us close the game," said Abel. "He had a nice finish off a draw and dump, he had a steal that led to a stop and layup and then had a nice assist to Wyatt. He caught the ball against Lander's press on a 2-on-1 break and dropped the ball off to Wyatt, who hit a tough layup in traffic."

Abel also praised Page for his contributions on offense, being the focal point of the team's attack, and on defense having to guard Tiger forward Niieihii Black.

"Mack Page was huge because they try to man-to-man us and a lot of teams don't want to zone us. But with their big lineup, they have a hard time matching up with Mack. So he's always a focal point when we play Lander on both sides of the court. Can he guard Niieihii on the defensive end, he did a really admirable job of that. He was able to do both things very well Saturday night," said Abel.

Today, the Warriors begin their 3A State tournament journey, they start off playing the Buffalo Bison, the No. 4-seed out of the Eastern conference, at 1:30 p.m. at the Casper Events Center.

The 3A East has been a defensive-oriented conference this season, with games usually being in the 40s to low 50s. But just because some of those teams don't have the offensive firepower of those teams in the West, Abel thinks the East has some dangerous teams and Buffalo is among the most dangerous of them all.

"We have a difficult draw. I think Buffalo is the most talented team on the east side of the state. A lot of people are thinking it's going to be an easy road to the championship game and another rematch with Lander. That's not going to be the case at all, we're going to have to show up and play well just to get to Saturday night," said Abel. 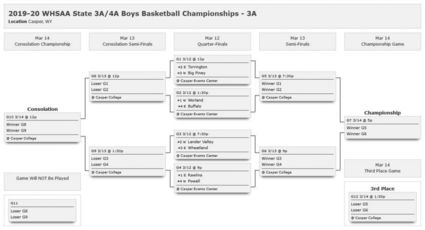 "You have to keep your focus on the opponent at hand and can't get caught looking too far ahead. I remember in Ten Sleep one time we'd kind of only lost to Burlington all year.

"We prepped like we were going to play them in the championship game, Burlington got knocked off in the semifinals and we ended up losing to Little Snake, a team we'd beaten by 15 the week before. We were kind of shell-shocked about the team we played," said Abel. "I've learned the hard way that looking ahead in the bracket doesn't do you a lot of good. Whoever you play first has got to be your focus first."