Guardsman says thanks to Worland schools for helping Kosovo students 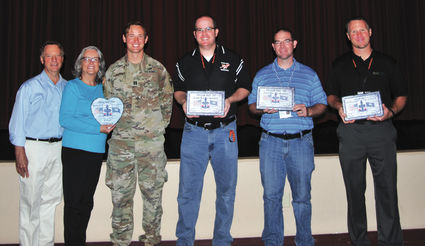 WORLAND -Wyoming Army National Guard Capt Eli Varney, returned to Worland this week to visit family and to say thank you to the Worland and Big Horn Basin schools who sent supplies for the Adopt-A-School program in Kosovo.

Last fall, Varney, a captain of Charlie Company, 1st Battalion, 297th Infantry Regiment for the Wyoming National Guard, and 2006 graduate of WHS, served with his unit in Kosovo. The unit returned back to the states about three months ago.

The plaques had the insignia for the C-CO 1/297th Infantry brigade from Hawaii, the battalion from Alaska, a Wyoming flag for the company out of Wyoming and the U.S. flag. It states, "Presented by the C-CO 1/297th Infantry for the school supplies donated to support Operation Joint Guardian in Kosovo during their deployment from May 2019 – March 2020. Your efforts made our mission a success in Kosovo. Thank you for putting the needs of others ahead of your own."

The plaques, made by a Serbian friend of Varney's in Kosovo, are signed by Varney and his First Sergeant Peter Slinden.

According to a letter and Memorandum for Record that Varney wrote, he was deployed with 137 soldiers, 56 of whom were from Wyoming, from Charlie Company. They were providing support to local communities and monitoring the border between Kosovo and Serbia.

In the letter he wrote, "Currently, we are working with schools that have very limited support and we are attempting to help them with basic educational items ... The Kosovo students have nothing and every little pencil or paper will be greatly appreciated."

Varney said when they patrolled the administrative boundary line they realized as a unit they wanted to have a positive influence on the people in Kosovo. He said in order to do that they knew they could reach the youth and the schools.

"We wanted to be engaging with the people, especially the youth. They started to see us as people," Varney said during an interview Monday.

In order to reach out they decided to set up an "adopt-a-school" program for the schools, which are K-7 and 8-12. Varney said they received permission from the battalion commander and worked with the liaison monitoring teams to set up the program.

The soldiers began reaching out to the schools in September 2019.

Items listed in Varney's letter include basic supplies such as pens, pencils, paper, colored paper, colored pencils, glue and notebooks; children's education toys such as wooden shaped blocks, puzzles, games; sports equipment such as soccer balls, Frisbees, cones, jerseys; and anything else would be appreciated, he noted.

In a December interview, Varney said notebooks, pencils and pencil sharpeners were the biggest need.

Varney said they were working with 12-15 schools throughout Kosovo. He said some schools in the country are "normal" and similar to what American students are used to with 12 to 15 students per classroom, others may only have one to two students. He added that some schools are so remote that when winter hits the students stay at the school and can only travel within about a five-mile radius due to the weather conditions.

In total the operation helped 25 schools and about 200 students throughout Kosovo.

He said through their work with the schools they were able to work with Kosovo and Serbian children and Kosovo and Albanian children, through different activities including tug-of-war and communication games where the youth learned that while they may be from different countries, they are the same.

He said they were also able to show the people in Kosovo the ability of working together and seeing people as individuals by working with the Swiss and the Turks.

"We were there when the tension was high between the U.S. and Turkey and so it sparked a lot of conversation. They wanted to know how we could work with someone who may want to harm us. We work with people," he said.

"You guys did the hard work, this (presenting the plaques) is minimal to what you did, talking to the students, shipping the supplies, I really do appreciate it," he said.

Varney told the principals Monday that of all the schools and organizations that helped with the operation, Powell, Worland and Star Valley schools donated the most supplies. He said it was impressive to see small towns and schools donate and help people they don't even know.

On Monday, at Worland Middle School Auditorium, Varney also presented a heart-shaped marble plaque to his parents Eric and Sandy Varney, "I wanted to get something small for them because without my mom and dad getting out and about and working with you guys and knocking on doors I would not have been able to get anything done."

But reaching out to the schools with supplies was not the only way the unit engaged with the students. They also played basketball, soccer and volleyball with them.

In addition to the schools the Guard members are reaching out to community members and churches.

Varney said they have done landscaping for churches especially during Muslim and Eastern Orthodox holidays.

They have fixed stairs and sidewalks, they have swept many a chimney with many of the homes getting heat from wood. They have also built a few chicken fences, he said.