U.S. Senate candidate hopes to be Wyoming's voice in D.C. 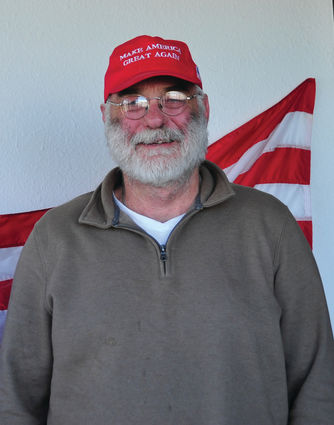 WORLAND - U.S. Senate Republican candidate Mark Armstrong of Centennial describes himself as a different kind of politician, not wanting to make the millions of dollars that career politicians do and limiting himself to two terms.

Armstrong, in a stop in Worland on a northern Wyoming tour late last week said he understands that a Senator gains $1.6 million in additional wealth every year in office, through campaign donations and lobbying.

"I won't do it. The people need to be represented, not big money," he said.

So why did the geologist from Centennial decide to throw his hat into the ring? Several reasons, first of which is longtime Senator Mike Enzi is retiring, but mainly because he feels the government is broken and he feels he has some expertise, specifically in the area of budgetary spending that could help the country.

What would he do regarding the budget? Armstrong said he believes in a zero sum budget, where each department is brought down to zero and they have to justify their spending.

Armstrong said he has always known sooner or later he would run for higher office. He served on the city council in Alturis, California.

Armstrong is a Wyoming native with some strong political and Wyoming roots. He is the great-great-great-great nephew of Abraham Lincoln (through Lincoln's marriage to Mary Todd). His great-grandfather is former University of Wyoming coach John Corbett.

He attended the Colorado School of Mines and graduated from the University of Wyoming. He worked as a geologist for Halliburton and as a senior engineering geologist for Earth Metric, now SHP. He has run his own company, Earth Engineers, since 1992.

Armstrong, running a grassroots campaign, hopes to visit every county central committee meeting at least once. He understands winning the Republican nomination can be an uphill battle with former U.S. Rep. Cynthia Lummis also announcing.

With Lummis having name recognition, Armstrong said it is important that he get his name out there to the residents of Wyoming.

"I have a year but it's going fast. I've lived in lots of places in the state. I love the country and I love the people. They are smart. They know there are problems," he said.

What are those problems?

Immigration. He said sanctuary cities have no right under the law to protect undocumented immigrants.

Prison reform. Armstrong noted many people are already working hard on that.

Public lands. I understand the management of public lands is atrocious and there have been issues with access. He noted, however that he agreed with both current Wyoming U.S. Senators, Enzi and John Barrasso, voted for the Wilderness bill that moved 324,000 acres into wilderness protection.

"I looked at the document that brought Wyoming into the United States and Section 12 specifies what state lands are. I would absolutely be opposed to selling state lands but they need to be properly managed," Armstrong said.

NEPA. The National Environmental Protection Act needs to be based on health risks.

Clean Water Act. The changes made by President Donald Trump need to be codified so that the next president can't change it with another executive order.

"We need stability. It effects farming and ranching so much more than it does urban living so we must codify these reductions in stringentness of the Clean Water Act and National Environmental Protection Act," he said.

Climate change/variance. "I want us to do good science for a change," Armstrong said.

He said a model for climate variance needs to include all factors that impact climate, not just CO2.

Armstrong said he has talked to some scientists who do not take into account the beetle kill on the national forests, however, a nature study showed that if you plant a million hectares of trees then the world's CO2 levels go back to the levels in the 1980s.

Gun control. "I am pro Second Amendment. I fish and hunt but the Second Amendment is not about hunting it is a God-given right for self-defense. It is not a government right. They don't get to infringe upon it," Armstrong said.

He added that owning a gun saved his life one day when four people followed him home and broke into his home but he had been able to retrieve his handgun with laser pointer and pointed it at one of the criminals. The three fled and the one he held until police arrived.

Armstrong said he is also a strong proponent of the First Amendment and voting rights and would like to see Citizen United ruling overturned so that only individuals who are qualified to vote are allowed to donate to a political campaign, not corporations.

Armstrong, a father of two and grandfather of two, said he wants people to know, "I'm honest. I'm not going to give up my eternal future by lying, cheating and stealing."