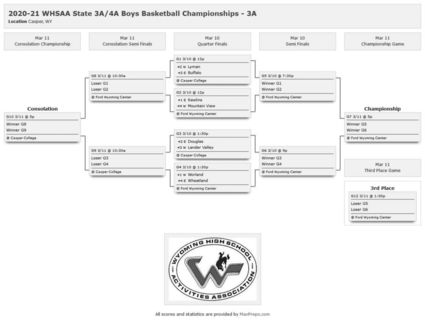 WORLAND - With back-to-back regional championships in the bag, the Worland Warriors' focus now turns to the 3A State basketball tournament on March 10-11 in Casper.

The Warriors 66-56 victory over the Lyman Eagles on March 6 at Powell High School gave the Warriors the No. 1-seed out of the west heading into this week's state tournament. It was also the first time in program history that the Warriors won back-to-back regional titles in the current WHSAA (Wyoming High School Activities Association) classification system.

Saturday's 3A West championship was a physical game, and between the two teams, the Warriors were the more physical group.

"We got to the free-throw line and shot 38 free throws, a season-high for us," said WHS boys basketball coach Aaron Abel. "Some of them came at the end when Lyman was putting us on the line. A lot of them were crashing the glass. That's something we preach against these zone teams. Lyman is a big team, long, athletic team. They try to throw their weight around and tried to bump us out and out physical us. They were a munch better team than from when we played them in January."

The Warriors had a long layoff between their last game versus Lander on Feb. 19 to the regional quad tournament in Worland on March 4. It could have messed with the Warriors, but they outworked every team from the first quad game until the championship.

"The biggest thing was that we played hard. We sustained a high level of play and energy for each game. It was a challenge because we played one game in nearly 20 days. How the guys responded from just practicing, that was great. Talking with the seniors [Monday], they said practices were competitive all through that stretch," said Abel.

While the championship was a great win, the more important win from last week was the 64-42 win over Lovell on March 4 at WHS. That victory punched Worland's ticket to state.

Page was Worland's leading scorer vs. Lovell with 21 points on 7 for 9 shooting, going 7 for 10 from the free-throw line and grabbing nine boards. Sanford was second in scoring with 14 and Carter Clark added 10 points off the bench.

"The most important thing was beating Lovell, and it was the seventh straight season we've made it to state. I think people forget how young this team. Lander starts five seniors, Powell starts five seniors, and we're the only team trotting out underclassmen in key spots," said Abel.

The Warriors then beat the Lander Tigers 60-55 on March 4 to advance to the 3A West title game. Page led the Warriors in scoring versus Lander with 20 points, going 10 for 17 from the field and had eight rebounds, three assists and two steals. Sanford was the only other Warrior to score in double digits with 17 points, shooting 5 for 8 from 3 and pulling down seven rebounds.

The run through regionals was a complete team effort by the Warriors, with multiple players coming up with big plays throughout the three games. While he might be one of the smaller players on the court, Clark came up with some big offensive rebounds against Lyman. Jorey Anderson did all the little things that helped make the team successful.

"Everyone had their moments, good and bad. Mack stood out with deflections, Brock too. Rudy is a big reason why we haven't seen zone this season, and he knocked down some 3s for us during our run. Now, the teams in the East all use zone. We're going to see a lot of zones this week. It's going to be a new challenge.

"Court's ability to see the floor and penetrate the zone. Any time a guy can average 10 a game without taking a jump shot, that's impressive. Jorey might not have had all the numbers, but he had a plus-14, and the team was better when he was on the floor," said Abel. "All of the guys who saw the floor played insanely hard."

The slump the Warriors had to battle through in early February paid off. It might not have been by design, but that dip helped the Warriors become a better basketball team. The lessons learned from that stretch powered them through regionals.

The 3A West championship game was not Worland's best shooting day, but they outworked Lyman on the offensive boards and for loose balls and forced the ball through the bucket.

"We've got scars now. We know what it's like to be on top and what's it's like to fall. It's good to know the full range of emotions, that's why we don't take anything for granted. That's why we play harder because we know what it's like. In our locker room, we have a sign up that says, 'Find a way to win when you don't make shots.' That's going to be the key for state, and, hopefully, we can do that," said Abel.

On Wednesday, the Warriors played the Wheatland Bulldogs, the No. 4-seed out of the East.

The Bulldogs have 3A's leading scorer in Kade Preuit, who averages 20.8 points per game. Preuit also makes a living at the free-throw line, where he averages over seven FT attempts per game.

"Preuit is a talented kid who can hit the 3, pull up, get to the rim and he attacks the glass. He's good at getting to the foul line. He'll be the guy we'll talk mostly about in our scouting this week. Court will defend him, we'll try and trap him and get into his dribble lanes and try to hold him under 10 points," said Abel.

Wheatland will also throw a zone defense at the Worland, and the goal for the Warriors is to get an early lead on them and keep the Bulldogs from wanting to play at a slower pace.

"We'll see some zone, and they like to take the air out of the ball. There are some flashbacks to the 2019 team that beat us in the first round at state. We struggled to keep the dribble drive in front of us then, and that's something we've got to be better at this time against them.

"We want to get an early lead. We'll press, trap and get deflections and hopefully, that leads to us getting a seven, eight-point lead at the end of the first quarter. That will be really big for us because then we can switch to our man defense," said Abel.