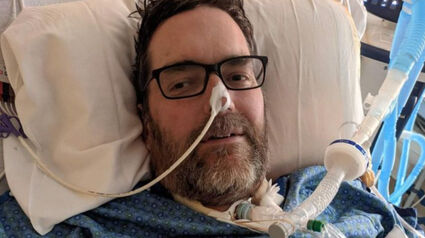 Cheyenne resident and former journalist and Northern Wyoming Daily News editor Bob Vines is pictured while hospitalized with COVID-19. Vines is raising money to buy new shoes for the CNAs who have cared for him and others across Wyoming.

His doctors believe he will go home around Thanksgiving, but he thinks that is a conservative estimate, and believes he will get out of the hospital in September, more than two months after he went in.

He was fully vaccinated when he caught COVID, but was also taking immunosuppressants, so he doesn't like to dwell on how he got sick or who he might have caught the virus from.

"I was at a beer festival. I had a lot of meetings with people. So it's not even worth trying to figure out how I got it," he said.

As a former journalist, Vines loves hearing people's stories. He can't help himself; it's just ingrained in him. So while he was at CRMC, and now that he has been at the Loveland hospital, he got to know the nurses fairly well.

He learned that all of his nurses had their own reasons for being at the hospital, and none of them had to do with money. For example, one woman went into nursing because she was dissatisfied with the care her mother received when she was hospitalized.

"They always allowed me dignity, even at my worst moments," Vines said.

While he already knew what a thankless job nursing could be, getting to see the situation up close took on a completely different meaning.

"When you're stuck in bed for so long, you spend an awful lot of time looking at the floor and at other people's feet," he said. "So I started talking to the CNAs there, and I know they don't make a lot of money. I asked if they got reimbursed for their shoes, and they don't."

Vines even noted that one nurse bought a brand new pair of Nikes, but one week later, the shoes were already beginning to lose their tread.

Thankfully, Vines has great insurance and no need for financial assistance, so when people have asked how they could help him while he is in the hospital, he came up with an idea.

Earlier this week, he launched a GoFundMe effort called "Shoes for CNAs," in which he is attempting to raise at least $5,000 to buy quality shoes for the nurses at CRMC and the Northern Colorado Long Term Acute and Rehabilitation Hospital.

As of Aug. 28, he had raised $2,220, but hopes to continue fundraising even after his goal. This will allow him to buy shoes for nurses at health care facilities across Wyoming, as Vines knows that, especially now, they need the help more than ever.

"I learned what grace was through the CNAs and [patient care technicians] that were assigned to me," Vines said. "These guys are doing 20,000 steps a day, and that's just for work."

This project is allowing Vines to both thank and apologize to the nurses who have been caring for him over these last six weeks, as he admittedly wasn't the best patient in the beginning.

To be fair, he was also intubated for 22 days and got an infection during that time, as well.

This experience has taught him a number of lessons, he said, some of which Vines hasn't even completely figured out yet.

"I've definitely got a new appreciation for CNAs and the work they do," he said. "They're all here because they want to be. If they hate their jobs, they're doing a great job of hiding it. I feel obligated to make sure I take care of the people who took care of me."