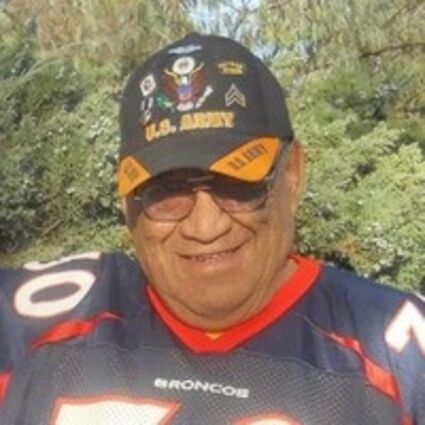 RJ was born on April 20, 1943, in Worland, WY to Mitchell and Catalina (Rodriguez) Trujillo. He was born & raised in Worland, where he attended all grades, K-12. RJ played all sports but favored wrestling and became State Champion, which he was very proud of. He also enjoyed softball too. This led him to coach in his later years, having his own husband and wife's teams called the Wild Turkeys and the Cold Ducks. RJ had a few different jobs between SD and NE included but not limited to working in the fields as a child for the sugar factory and laying railroad ties.

RJ attended some college then got drafted to serve in the U.S. Army. He was an honorably discharged veteran from the U.S. Army, after being wounded. RJ served in the Vietnam War and was a recipient of a Purple Heart. After the Army he worked a few different jobs and went back to college and obtained a degree in teaching. RJ had dedicated his life to serving his country and to teaching. He spent many years dedicating his life to tribal schools on the Pine Ridge Reservations.

RJ married his best friend and had his daughters. He kept busy raising them and working until 2010.

In the mid 90s, he met his current wife, Laura Trujillo, who stayed by his side until the end. In 2010, RJ retired from the education field and moved to Hot Springs where he enjoyed everyday life with his grand babies, the CMs, raising from babies to graduations and proud of the peaceful life he built for us after retirement.

RJ moved to Hot Springs for the use of the VA, for he was going to do dialysis 3 times a week. After a couple of years of dialysis on December 12, 2012, he was a lucky recipient of a kidney donation. This afforded him to stay off dialysis for a good 7-8 years and had recently gone back on. He was always in good spirits, healthy as he could be, loving life and living it out to the fullest. He got his 10 more years in, Amen!

RJ was a Denver Broncos Fanatic, all his life, even owned his own season tickets. fixed up all his cars with bronco decals and custom designs. He was a great green thumb from having house plants and gardens to even helping people with their yards and built fountains with water ponds and educated people on plants and ponds. RJ had the gift of making friends wherever he went. He was a proud grandpa and loved outdoor life.

He is preceded in death by his parents, Mitchell and Catalina Trujillo; siblings, George, Manual, Ralph, Jesse, Esther (George)Miller; best friend, Carol Red Owl; many family members, friends, and brothers of war who we are sure was meeting him with smiles and hugs.

The Trujillo family would like to thank all the nurses, doctors and caregivers for their hard work and compassion during Robert's medical care.

Private family services will be held 1:30p.m., Friday, July 22, 2022, at the Black Hills National Cemetery. Military funeral honors will be provided by the U.S. Army.

Arrangements have been placed under the local direction of Chamberlain McColley's Funeral Home in Hot Springs. Written condolences can be made at http://www.chamberlainmccolleys.com.