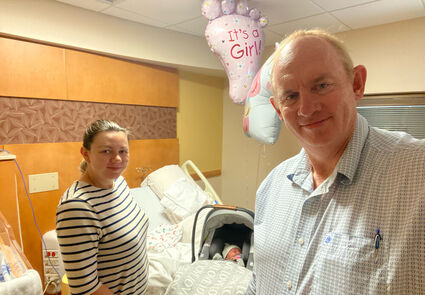 The couple celebrated the birth of their daughter on Aug. 6, 2022, at 11:03 p.m. Pictured from left to right are Anastasia (Nastya) Talbot, Emily Mari Talbot and Gerhard Talbot. Photo courtesy of Gerhard Talbot.

ROCK SPRINGS - A new bundle of joy was recently born at Memorial Hospital of Sweetwater County. However, her parents faced several challenges leading up to her arrival. Gerhard and Anastasia Talbot came to the United States after having to flee Ukraine due to the ongoing war.

"I am born South African and have been a United States resident since 2016. My wife Anastasia (Nastya) Talbot, is Ukrainian and received her United States residence on May 5, 2022," Gerhard said. "We had been living in Ukraine, a town called Kremenchuk in the province (oblast) of Poltava, for the last 4 years while I was doing temporary contract work in my business consultancy for a local mining business."

He said that they had been waiting almost two years for Nastya's resident visa to be approved.

"When the war was building up and the invasion commenced, we reached out to the state department, but had no support of help in expediting the final approval step. The hardest for us was leaving into the unknown of Europe, as Anastasia was not allowed to travel to the U.S.A."

On March 6, they made the decision to flee.

"We were able to leave an active war situation in Ukraine after gaining approval documents to take a vehicle across the border and save up 50 gallons of gasoline for the 600 mile journey to the Polish border.

"Knowingly facing a one way journey into the unknown, the trip was filled with mortal danger of missile attacks and getting robbed of the gasoline we collected due to shortage and getting stranded in harsh freezing weather.

"We stayed overnight in the car at a remote gas station after we were diverted away from a border we planned to cross. The next evening, we finally made it safely across the Ukrainian border into Moldova," Gerhard said. "It was a 48 1/2 hours journey, with 59 military checkpoint stops and 5 1/2 hours waiting at the border to cross."

Gerhard also said that they only took important documents and a few items they knew they could carry in one suitcase each. Upon crossing the border into Moldova, there were no accommodations available, so they drove 3 hours to the capital to find a hotel.

"We planned to fly to Frankfurt the day where we had the best chance of finalizing her visa. Unfortunately, the airspace over Moldova was closed due to the war and missile threats," he said. "So, we had to drive another 300 miles to Bucharest, Romania. We rested in a hotel and departed the next day to Frankfurt, leaving the car in Romania.

"On arrival in Frankfurt, we were told by the embassy that they could not help us and referred us to the website. It took 2 months waiting to eventually finalize this, after active involvement of an immigration lawyer and a doctor from the hospital in Rock Springs writing letters to expedite based on pregnancy complications."

The Talbots said that two people in particular helped quite a bit during this process.

"Leslie Taylor from Memorial Hospital of Sweetwater County and Dr. Samer Kattan made it possible for us to have remote visits to manage the pregnancy. Not knowing when we could get to the U.S.A. was the biggest worry and stress. We have a safety cut off date for flying to the U.S.A. due to the pregnancy and even had to start making plan b arrangements in case. Not being able to set up a home and baby room was the toughest."

Gerhard said that during the time they were waiting for the visa to travel, they were able to make sure that Nastya's mother and sister were able to evacuate.

"I had received a job offer at Tata chemicals Green River, but it was complicated as I would not be separated from my wife. When it appeared that the visa was eminently to be issued, I accepted the role and commenced working here while getting everything prepared for my wife's arrival two weeks later."

Nastya arrived in New York, received her permanent residence and then met up with Gerhard in Salt Lake City.

"We traveled to Rock Springs and the next day met Dr. Kattan in person for a full physical, checkup and ultrasound. We continued to see him weekly until Emily Mari Talbot was born on Aug. 6, 2022, at 11:03 p.m."

Gerhard shared that his mother would have turned 90 years old this year on Emily's birthday.

"This is very special, in particular since on arrival in South Africa to visit family, we discovered that Anastasia was pregnant."

The Talbots said that they are thankful for those who have helped along the way.

"Within the first few days of arrival, Tami Christensen from High Country Realty helped us find the ideal house here in Rock Springs, with Judy Osborne of Wells Fargo helping with finance.

"In particular, thanks to Leslie Taylor, Dr. Kattan, Dr. Moore and the OB staff from Memorial Hospital of Sweetwater County and Roger Hoops and Pam Luettich from Tata Chemicals North America who made our trip and settlement in Rock Springs possible."

"Congratulations and thanks goes to my wife Nastya, who from the first time she knew she was pregnant, always looked after herself and the baby so well. She wanted all natural birth and didn't want to take any pain medication or relief. I am so proud of my beautiful wife and stand in amazement for what she did to deliver our beautiful baby girl."