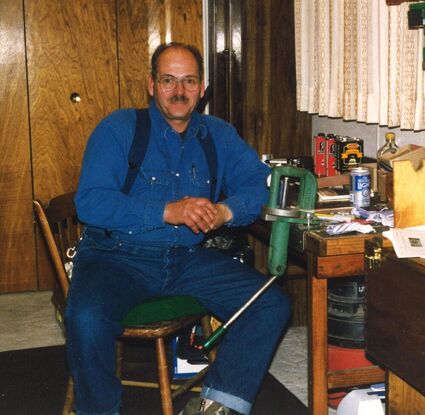 Martin Blair Johnston, 74, was found September 7, 2022 at his home following a lengthy illness.

Marty was born on February 10, 1948 in Williamsport, Pennsylvania, the only child of William and Anna Christine (Graves) Johnston. His family moved to Ft Sill (Oklahoma) for a short time when he was young, but then returned to Montoursville, Pennsylvania where he received most of his education. While in high school, he also learned the machinist trade, something that would intrigue him for the rest of his life. His father's health (due to his time in the mines and as a WWII tanker driver) forced the family to move to California just before Marty's senior year. At 17, he drove his mother to the west coast where the family settled in Corona. He graduated from Corona High School in 1966.

On July 1, 1967 he married Sandra Lee Swing in Corona. The couple was married ten months before Marty was drafted into the United States Army during the Vietnam Conflict. He served in Vietnam for only 6 months when he was sent home to attend his father's funeral. Because he was the only child, he was reassigned to Ft. Ord and finished out his service in San Pedro, California at Ft. McArthur. After being honorably discharged, he went to work in a motorcycle shop in Yucaipa.

1974 saw the birth of their first son, James. The following year the family relocated to Worland, Wyoming where Marty went to work for Elmer Nelson and Don Wagner. He took a short one-year stint with the uranium mine in Glenrock where they also saw the birth of their second son, Martin Anthony in 1978. Returning to Worland to put down permanent roots, he leased farming land from Voss' and later Bihr's before going to work on the McKamey farm. After a few more years he decided to return to his first love, being a machinist. He started with Tommerup Machine Shop and later moved to P & S Machinery where he stayed for around 20 years. He and Sandee took a short hiatus when they moved to Las Vegas for a year to run a Dairy Queen franchise, but returned to Wyoming and the great outdoors. He officially retired in 2014.

Marty was a jack-of-all-trades. He was an accomplished machinist. The joke was that he could not attach anything in an email, but he could program the CNC to create anything he wanted to. He was meticulous about his work and a perfectionist, even bordering on OCD about his work. He was a life-long learner who would master a task with the utmost proficiency and then eagerly move on to his next interest. His multiple interests had him build the Worland Warrior Football touchdown cannon. He was an avid shooter and hobby gunsmith. He loved sharing his knowledge of shooting to anyone who would listen, especially his grandchildren. He loved riding motorcycles and fishing. He was looking forward to doing some ocean fishing with Jim this fall and spoke of it often to friends.

He was preceded in death by his parents. Survivors include his wife, Sandee; sons, Jim (Jamie) Johnston and Tony Johnston of Oregon; grandchildren: James H., Hayden A., Hannah F. and Ava L.

Marty, husband, provider, father, friend and fellow warrior, will be missed terribly! Until we meet again!

Memorial services will be held 11:00 a.m., Saturday, September 17, 2022 at American Legion Post #44. Memorial donations may be made to Wyoming Patriot Guard Riders and sent to PO Box 524, Worland, WY 82401. Online condolences may be made at http://www.bryant