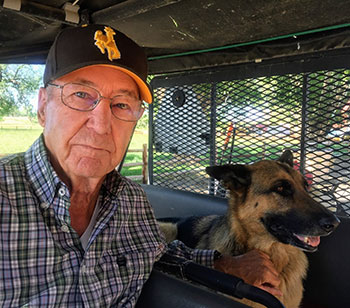 Wayne T. Voss, 79, of Worland, Wyoming, passed away Saturday May 26, 2018, due to cancer, at Worland Memorial Hospital with his loving family at his side.

Wayne was born on July 14, 1938 in Worland, the son of Wayne E. and Mae T. Voss. While growing up in Worland, Wayne helped on his parents' farm, wrestled, played in the school band, and even drove the school bus starting at the age of 14. Wayne graduated from Worland High School in 1956, and he later went on to attend the University of Wyoming where he was elected president of the Sigma Alpha Epsilon fraternity, wrestled for 3 years, and graduated with a degree in Education in 1960. After graduating college Wayne took a position at Santa Clara Junior High in Riverside, CA where he taught Mathematics and Industrial Arts. In 1962 Wayne was commissioned as an officer in the United States Marine Corps. He fulfilled duties as a pilot during the Vietnam War and rose to the ranks as a second lieutenant, he also received a national defense service medal. After achieving the rank of Captain, Wayne was honorably discharged in January of 1966. Following his time in the military, Wayne began his beloved career at Continental Airlines where he flew around the world as a Captain until his retirement in 1998. During much of his time at Continental Airlines, Wayne was elected by his peers as Master Executive Council President of the pilot's union where he championed for better wages, benefits and working conditions for pilots. Back home in Wyoming, Wayne served on the Northwest Community College Foundation Board, Wyoming Water Development Commission and the Wyoming Real Estate Commission; he was appointed by the Governor to these positions. Wayne was also the main driving force behind various commercial real estate developments in Worland, Cheyenne, and Jackson. He also developed several projects in Colorado and California.

On September 7, 1990 Wayne married Mary Beth Peterson. They purchased the Voss Family Farm, and the historic Worland Ranch where they raised their two children, Nick and Taylor. Ultimately, both Nick and Taylor would follow in their father's footsteps. Wayne took great pride in watching and mentoring Nick as he achieved his commercial pilot's certifications. Wayne was also very proud to see Taylor follow his precedent and become a teacher. Wayne enjoyed a hard day's work and making improvements to the property. He spent many hours removing Russian Olive trees around the farm, as well as countless other projects. He had a vast collection of classic John Deere tractors and construction equipment. He enjoyed having his beloved canine, Buddy by his side going for rides around the farm. Wayne enjoyed sharing a good joke, making others laugh and teasing those he was fond of, "Nicker", "Boofy Lou", "Bethy", as well as his coffee shop buddies downtown at Ranchito and Maggie's.

He was preceded in death by his parents; Wayne E. and Mae T. Voss and his brother-in-law Robert Schafer.

This Aviator has departed one last time leaving a lasting legacy, and to those who knew him an undeniable hole, gone but never forgotten.

Memorials in Wayne's name can be made to Washakie Hospital Foundation or Rocky Mountain Lions Eye Bank in care of Bryant Funeral Home PO Box 524, Worland, WY 82401. Online condolences may be made at http://www.bryantfuneralhomeonline.com.