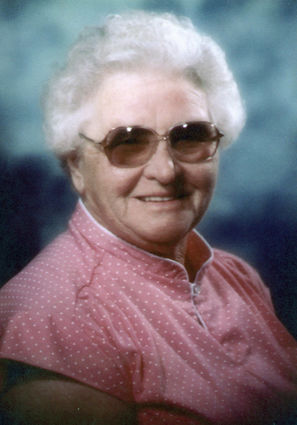 Arlene C. Lane, 93, passed away on December 2, 2018 at the Thermopolis Rehabilitation and Care Center.

Arlene was born on December 11, 1924 in Casper, Wyoming, the second daughter born to Clifford Hugh and Maude Pearl (Reeves) Glenn. She spent her early years in Casper before the family moved to Worland in the early 30's. Her father moved the family to work for the packing company as a butcher.

She received her education in Worland. At age 16 she married Robert Miller and to this union was born 3 children, Jack, Linda and Katherine. As Arlene became a farmer's wife, and a (not-so) hired hand the couple farmed on the Davis, Gates and Hake properties through the years. She worked side by side with Robert in making the land blossom and reaping its bounty. She was one of the first women to drive beet truck during harvest. Though she was told that it "wasn't lady-like" it did not detour her desire to be a part of the work. Their youngest daughter, Katherine, even rode in a basket next to her so Arlene could help with harvest that year. In raising her children, she taught them the importance of a job well done. Because of her early training from her father, she could butcher and cut up meat faster than most. What would take some men two days could be accomplished in a few hours by Arlene.

After the children had finished high school, she and Robert divorced. Arlene moved to town to take care of her in-laws and went to work for Lane's Meat Processing.

She later married Harold Lane and the couple moved to Riverton and then to Gordon, Nebraska where she worked at a grocery store. They returned to Worland for a short time before moving to Montana where they worked on a horse ranch. After Harold's death, Linda brought her home to Worland where she stayed until her failing health needed professional nursing care.

Before there was a Fair Board, Arlene worked the Washakie County Fair, whether putting up displays or booths. She was also very active in the Eagles and served as an officer for many years. She had big gardens every year she was on the farm and one could always find mums in her yard. She was a wonderful cook and known for her delicious bread. There wasn't a cut of meat she didn't know how to make into a delectable meal. She worked hard all her life. After she moved to assisted living, the CNA's would often comment that Arlene was just so "frisky" and how they loved her.

She was preceded in death by her parents, both husbands, sisters, Margarite Boylan, Katherine Dean, Mildred Salzman, grandson, Robert Sanchez, one great-grandchild and son-in-law, John Allred.

A Celebration of Life will be held next Spring.

Bryant Funeral Home is assisting the family with the arrangements.