Warriors and Lady Warriors ready for 3A West regional meet 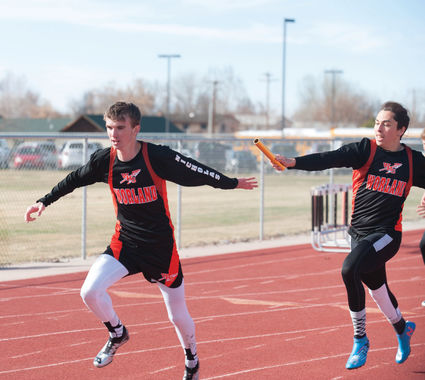 Warrior Victor Olvera hands the baton to Chris Nicholas during the 4x100-meter relay at Worland High School on April 11.

THERMOPOLIS - The moment has come for the Worland High School track and field athletes. After all the meets in the regular season and hard work in practice, the postseason is finally here. Worland will be in Pinedale May 10-11 for the 3A West regional meet as they battle against athletes from Big Piney, Lander, Lovell, Lyman, Mountain View, Pinedale and Powell for spots at the state tournament and conference bragging rights.

"We're ready and I tell the kids this is the time to be at the top of their game because it could be their last one of the season," said WHS track and field coach Tracey Wiley. "Regionals is a zero-zero battle, anything can happen and kids can step up to the plate a lot more because of a regional setting.

"The West is tough and it's going to be a good competitive meet. We've pushed the kids to prepare them for the meet and they'll be ready to bring their best effort. The way these kids have been pushing each other in practice is just absolutely awesome for us coaches to see."

Last week Worland closed out their regular season in Cody, Wiley saw terrific results from her team as they built momentum heading into regionals.

Warrior freshman Taylor Pierce set a personal record in the long jump and took first place with a leap of 18-8.25. Senior distance runner Charles Rishel set a PR in the 800-meter run, finishing third with a time of 2:12.91.

Lady Warrior senior throw Alexa Caballero threw a 34-5 in the shot put to take first and was fourth in the discus, throwing 105-8.

"Charles had a 10-second PR in the 800 which is really good in the 800. He's really trying to get to state in that. He works his tail off," said Wiley. "Alexa took first in the shot and she's a competitor and she knows about [Lyman's] McKinley Bradshaw. She's ready to compete and it's going to be good for Alexa to have to throw against someone like McKinley.

"Taylor Pierce our freshman did really well in the long jump with a good PR and got first in Cody. For a freshman getting first at any varsity meet is good," said Wiley. I'm just proud of all the kids, it was a good meet and they all worked hard."

There were no new state qualifiers in Cody but sprinter Kait Wassum and distance runner Porter Harman both bested their qualifying marks in their respective events.

"Kait bettered her AQs in the 100 and 400. I'm excited to watch her run and be pushed because the West has some fast girls," said Wiley. "Porter bettered his AQ in the 3200, he took off four to five seconds."

Added Wiley about Wassum closing in on breaking the sub-minute mark in the 400-meter, "Unofficially we had her at a 59 and she was so excited and we were excited for her. Then the official told her she came in at 1:00.3 and she was not happy because that's her goal. She wants to break that minute mark. I know she's going to break it at regionals because there's going to be some good 400 runners down there."

While Caballero, Harman and Wassum will be among the Worland athletes in the hunt for conference championships, other Warriors and Lady Warriors will help their teams by scoring points and pushing other team's athletes out of the top eight.

Only the top eight finishers in individual events and top four relay teams advance to the state meet in Casper next week.

Sophomore high jumper Denali Jones will be among those athletes doing her part at regionals and is among the Lady Warriors' consistent performers as she always seems to place.

"Denali's goal is to clear the five-foot mark and she's sitting third in the conference. She's excited about that but she's not happy with sitting third because she's a competitor and wants to clear five foot. We've adjusted a few things with her this week to get her to lean away from the bar a little more. We're just doing little adjustments to help her clear it because she can clear it.

"She'll be going against plenty of seniors down at regionals and be competing against Bradshaw who is a 5-6 jumper. [Bradshaw's] a senior and a D-I athlete but it will be great for Denali to compete against her," Wiley said.

For the Warriors, Marcus Wiley in the 400 will be among the many Warriors pushing to punch their ticket to state by making it in the top eight.

"Marcus, when he doesn't have as many events in one day I think he can get down to 55 or lower but again 3A is very tough. It's a 53 to get into the top eight and just a couple weeks ago it was a 55. It's going to be competitive but anything goes. It's a two-day event and that should help keep out kids fresher with the recovery time," said Coach Wiley.

The excitement for this weekend has been building through the entire team as teammates have been talking about regionals and how they plan to push themselves in order to qualify for state.

Harman and Rishel were those that Wiley overheard during school hours talking about regionals and state.

"Charles and Porter are pushing each other to get to state. Charles is chomping at the bit to make it in the 800. They were talking about it in class and they continued to work hard," said Wiley.

Getting to state is much a mental game as it is a physical one. To get her athletes in the right frame of mind and have the confidence at regionals this weekend, Wiley and her staff have continued to push their athletes in practice all week long.

"As coaches, we can't back down on the week of regionals. We can't get lazy, so to speak. We have to show them that we're still pushing them. If they saw us as coaches being laid back then that's kind of a mindset to them," said Wiley. "So it's really important as coaches to keep being competitive. We're not backing now so it's not acceptable for them to back down."