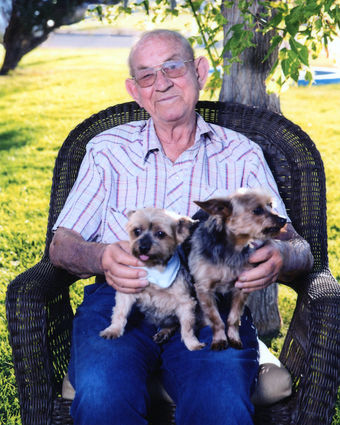 He was born March 8, 1934 to Natalie (Haynes) and Gene Sherman in Gebo, WY. While in his youth, the family moved around working in the Texaco oil fields. Following graduation from Cutbank, Montana High School, he enlisted in the Navy from 1953-1957. After his honorable discharge, Bud was traveling home to Montana from visiting family on Black Mountain. He noticed an ad looking for a plumber for Roberts Plumbing & Heating in Worland, WY and ultimately made Worland his home.

Bud met Sharon Jones and her three children, Boyd, Connie and Donna. They were married on March 23, 1963. From this union they had two more children, Lori and Holly. They remained happily married until Sharon was called home to be with the Lord in 2009.

During his time in Worland, Bud owned and operated Robert's Plumbing & Heating. After retiring Bud and Sharon enjoyed traveling, woodworking, gardening and reworking antiques. On weekends, you could always find him fishing and four-wheeling with his best friend, Bill Perry. Bud loved hunting and fishing, but most of all his family.

He was preceded in death by his parents, his wife of 45 years, Sharon Sherman, son, Boyd Sherman, daughter, Donna Eberle, two sisters, Marilyn (Wally) Bradley and Norma (Lloyd) Hueth and his yorkies Simon and Pork Chop.

Those left behind to cherish his memory include his youngest sister, Betty Lou (Jerry) Stender of Montana and his daughters Connie Stauffer of Minot ND, Lori Bruha (Kent) of Grand Island, NE. Holly Berryman (Tim Porter) of Powell, WY.

Bud's passing will leave a hole in the heart of everyone who loved him and he will be greatly missed by everyone who knew him.

Memorial services will be held 2:00 p.m., Friday, June 21, 2019 at St. Luke's Lutheran Church. Inurnment will follow at Riverview Memorial Gardens Cemetery with Military Honors provided by the American Legion Post #44 and the U.S. Navy. Memorial donations may be to St. Jude's Hospital c/o P.O. Box 524, Worland, WY 82401. Online condolences may be made at http://www.bryantfuneralhomeonline.com.