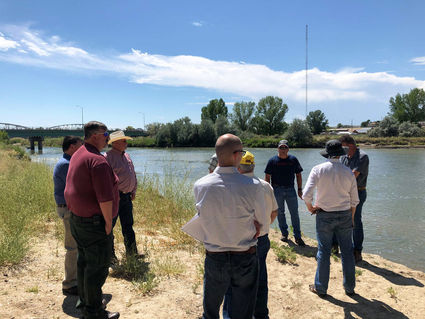 County Commissioner Terry Wolf (back right) discusses what happened in 2017 with the sandbar near Riverside Rotary Park, to give further information to the US Army Corps of Engineers on Monday August 5.

WORLAND – When large blocks of ice floated down the Big Horn River and caused flooding in downtown Worland in February 2017, response to the event was huge from the community.

The efforts to protect homes and the community was a huge part of the recovery effort, and removing more than 34,000 cubic yards of a sand bar from the middle of the river next to Big Horn Avenue Bridge was a major par...