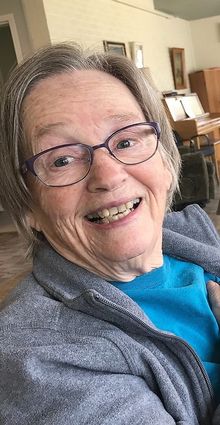 JoAnn Marie Kaufman, age 85, went home to be with her Lord and Savior on August 17, 2019 at Worland Healthcare and Rehab Center where she had resided for the past several years. JoAnn was born September 26, 1933 to Fred and Marie Duitsman, the fourth of six children. She grew up on a farm near Fonda, Iowa and attended Williams Township #5 country school.

On June 30, 1955 she married Wayne Allen Kaufman. To this union two children were born, Debra and Daniel. The couple later divorced.

After working as a nursing assistant and prison correctional officer, she fulfilled her lifelong dream of becoming a nurse. Mid life, she graduated as an LPN from Des Moines Area Community College at the Carroll, Iowa campus.

She moved to Wyoming in 1989, going to work at the Wyoming Retirement Center in basin as an LPN, retiring after 11 years.

She is survived by her children Debra Ruehl (Dwight) of Worland and Daniel Kaufman of Basin; sister, Shirley Johnson (Earl) of Manson, Iowa and numerous nieces and nephews. She was preceded in death by her parents, three brothers; Robert , Edward and Richard, and one sister, Norma Harrison.

Until her health failed, JoAnn loved riding her horse as well as hiking in the hills and mountains. She taught her children to love the Lord as she did. She was beloved by her family and will be greatly missed.

A funeral service will be held Saturday, August 24, 2019 at 1030a at the Cloud Peak Bible Church in Manderson, Wyoming. Arrangements have been entrusted to Atwood Family Funeral Directors.