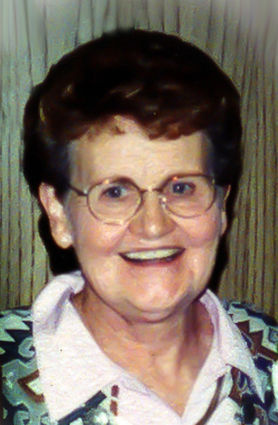 JoAnn was born to Charles Dewey and Iva Mae Thomason on July 30, 1928 in Holdenville, Oklahoma. JoAnn grew up with an older brother, Charlie Jack, and a much beloved younger sister, Melva Lou (Ludy). She attended a number of schools as the family moved frequently due to her dad's work in the oil fields. JoAnn finished high school in Laramie while rooming at Ivinson Hall with her sister and then stayed in Laramie to pursue a degree in Medical Technology at the University of Wyoming graduating in 1950.

During college JoAnn met and married the love of her life, Jack, and after college graduation they made their way to the YU ranch on Meeteetse Creek. JoAnn embraced the small community of Meeteetse as her "home town" and treasured the connections made while living there. She and Jack always said that their most proud accomplishment was raising their 5 children. In a recent farewell JoAnn said, "It is wonderful to have such loving children - 'loving and honorable' as Dad would say."

JoAnn often spoke of her late mother-in-law, Mabel Winninger, as a great influence regarding country living, friendship and entertaining. JoAnn loved the neighboring ranch families and became close friends with many of the Meeteetse ranch wives through a neighborhood bible study.

Nothing brought JoAnn Winninger more joy than welcoming a new grandchild into the family with a carefully crocheted baby blanket or holding a new great grandchild. JoAnn's many nieces and nephews and their families held a warm place in her heart as well.

When JoAnn was no longer living on the ranch she dusted off her diploma, took refresher courses and started her own business in the medical field. She worked at this successful business until retiring at nearly 80 years of age.

JoAnn loved Facebook and used it to keep in touch with friends and family almost daily. Her posts brought much joy, laughter, encouragement and love to all who read them.

JoAnn was preceded in death by her husband of 68 years, her parents, her siblings, and a great grandson. She is survived by two sons, Charles Winninger and David Winninger, three daughters, Connie Polsley, Mary Hixson, and Janet Bolz, fifteen grandchildren, and many great grandchildren.

JoAnn Ruth Winninger will be honored at a memorial service at United Methodist Church, 1405 Beck Ave., Cody, Wyoming on October 12, 2019 at 10:00 with burial to follow at Riverside Cemetery. An online guestbook is available at http://www.BallardFH.com